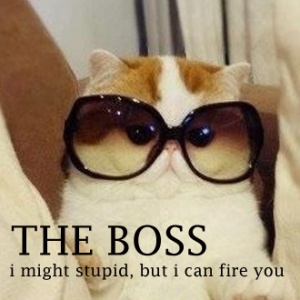 I do my research. Before writing this post, I consulted a tome of goodness known as the Demotivational Dictionary (Imaginary Edition):

1: the weakest link in any business activity

Wise words. I should know. I wrote that book.

I remember the time someone called and placed an order for $14,000 worth of our shitty product, wanted it shipped immediately, and promised to send payment on the second Tuesday of next week.

The boss literally became a Viagra commercial as he frantically shoved our financial futures out the door. He wanted that sale. And thus began the saga that would eventually be known as The Year of Getting Our Money Back.

For my next trick, I will use the power of analogy to illustrate typical boss functionality.

END_OF_DOCUMENT_TOKEN_TO_BE_REPLACED 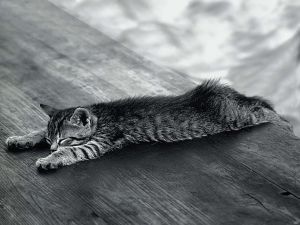 Tom’s Law #42
Want to know who’s really in charge? Wait for the shit to go down and just watch.

Every year or so the stories briefly get featured on the evening news like a blip on a gloomy green radar screen then are as quickly forgotten. Until the next study is released or, worse, some human bodies are asploded. Now that’s news.

Think of a list of professions where you’d really like people to be fully rested and alert. Airline pilots? Air traffic control? Doctors? Truck drivers?

Nice list. Congratulations. You just came up with a list of people that we fuck the most. Logical, right?

This week, again, the issue of employee fatigue was in the news. The FAA commissioned a study on air traffic controller fatigue. The results are none too surprising. Then the government fought for four years to keep the findings secret.

“Psst. Hey dude. I’m going to make you an offer you can’t refuse. You pay top dollar for me to conduct a study about how I’m fucking you over. Then I keep the results secret from you. Sounds like fun, right?”

What could possibly be going on here? Luckily I got a good night’s sleep.

END_OF_DOCUMENT_TOKEN_TO_BE_REPLACED

Short Shorts: How to buy a PC

The boss asks for your opinion. “I need a recommendation for a new computer.”

You ask a few questions. Price range? Purpose? Anything special it needs to do?

You take the task seriously. You conduct research. You think outside of the box. You are creative and expend energy. You want to do a good job.

This isn’t your specialty but you try your best. After finding what you think is a pretty good answer, you pass it on.

The next day that boss says, “My spouse told me to buy something else. Something totally different than what you recommended. I’m going with that.”

In a few days the computer shows up. It’s neither. It turns out the boss went for a third option. The very thing you cautioned against way back at the beginning.

The boss now has a stupid piece of shit but it was worth it to put you in your place and make you spin your wheels. It sure can be funny how things work out.

Mister Thompson calls the waiter, orders steak and baked potato
(Then) he leaves the bone and gristle and he never eats the skin
The busboy comes and takes it, with a cough contaminates it
(And he) puts it in a can with coffee grounds and sardine tins
And the truck comes by on Friday and carts it all away
A thousand trucks just like it are converging on the Bay

Click to hear these lyrics (and more) in action

And now, from our ongoing series Tales Of The Justice…

Who says that justice is dead? Finally, a punishment that fits the crime.

For once the justice system finally seems to be working. Really, shouldn’t reporting too early to work always result in jail time? I think so!

I humbly suggest we make this a constitutional amendment. I sustain the motion!

For those OCD nitwits out there who demand more detail I’ll reluctantly say this. His job is picking up the garbage. A city ordinance says that garbage shall not be picked up earlier than 7 a.m. McGill, obviously a true go-getter in the refuse collection industry, started his shift early. This naturally startled residents in an affluent neighborhood of Sandy Springs, a suburb located north of Atlanta.

Naturally the startled residents, hearing the terrifying sounds of a garbage truck around 5 a.m., responded to the situation by calling 9-1-1.

I hate to even think what I would have done in similar circumstances. Of course you call 9-1-1. That’s what you do. That’s what public service ads on television have been telling us for years. 9-1-1 is reserved for the important stuff. I probably would have gone further and voided my bladder and bowels. That feels like the Sandy Springs thing to do.

Residents of the wealthy neighborhood reportedly include Herman Cain and “professional athletes and executives for Delta Air Lines.” We now pause for these commercial messages while I cancel my subscription to ESPN and make new travel arrangements.

Thankfully the culprit was apprehended and the garbage in his truck was (presumably) seized into state’s evidence. Finally a task worthy of Atlanta CSI.

“One thing’s for sure,” said the star du jour while removing his super-sparkly sunglasses. “Something about this case stinks.” He then made some comment about keeping a “lid” on news coverage.

Justice was quickly served. The prosecutor (chief solicitor) wanted 30 days in jail. It was McGill’s first offense. McGill voluntarily agreed to the “plea deal” without a lawyer present and only accompanied by a representative of Waste Management, Inc., who was expecting nothing more than a routine $1,000 fine.

The prosecutor stood by the outcome saying it was right to go after McGill personally rather than his employer. “Fines don’t seem to work,” he said. “The only thing that seems to stop the activity is actually going to jail.” Yes, these are real verbatim quotes.

Fortunately, by press time and despite the fact that the story had been picked up internationally, the city and the judge had a miraculous change of heart and the charges were dropped. Yeah, just like that. That’s how they roll in Sandy Springs. Bag it and tag it. This case is done.

Suddenly the solicitor was saying whacky shit like 30 days in jail for violation of a noise ordinance was “disproportionate to a first-time offense.”

They sure do keep things classy in those ritzy neighborhoods.

Delta, Science and The Bible

I believe that The Bible is incomplete. Each and every book should have ended with the sentence: “Well played, God. Welllll played.”

I speak from experience since I believe the point of my life has been to add a new chapter. Hint: It’ll be called The Book of Tom and it’ll be inserted right after Job. Howdy, neighbor!

Yesterday I had yakisoba noodles with chicken for lunch. I ate less than I wanted because I was saving it. For today.

I now read from the Book of Tom:

Tom’s Law #42
Look forward to something and you’ll get exactly what you deserve.

I was really looking forward to lunch today. I think we all know this isn’t going to turn out well. Let us prey.

END_OF_DOCUMENT_TOKEN_TO_BE_REPLACED 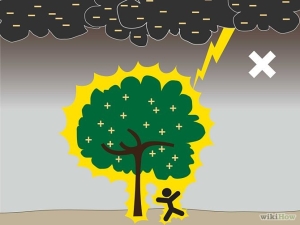 An event happened and news media took notice and the following headline was written:

To my mind this poses many questions. What about the profession of the victim warranted prime time placement in the headline? What if the victim had a different profession?

Let’s find out! In case it isn’t clear, all of the following versions are my own.

I’m not sure which is most important here. The fact that she’s a nun, was in a tree, or was chased by a bear.

Sometimes bad people get to be happy. Life isn’t fair.

I canna change the laws of physics!

Isn’t that killing two birds with one stone? Win win!

We get paid to write headlines.

Lighting storms out in anger

Don’t be that way.

Lightning fries a pound of bacon but pig survives

This joke is in very porcine taste.

Model hit by lightning takes it in the shorts.

They call that fashion?

I’d call that a lightning lobotomy.

Life is a strange ballet. 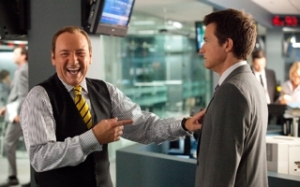 I recently completed my first year of working at home as a contractor. Although not as good as my dream of doing nothing, the year was still pretty good and … I had no complaints.

What’s good about working from home? No phones. No walk-in customers leaping in your office. No floor sales. No public toilet across the hall. No attending awkward pizza-only lunches on every employee’s birthday. You don’t spend your day using company-owned equipment. (A previous boss liked to joke he was logging my keystrokes. That was a real damper on my twitter activity.) You get your very own chair. No boogers from other employees on your stuff. There’s an ottoman where two cats sleep and the view out the window is squirrels playing.

When my one-year contract expired, of course I wanted more. It was a no-brainer.

These are the actual and verbatim excerpts of the official transcripts of the negotiation process. I’m sharing them because I don’t mind being humiliated in public.

I am ready to keep things simple and renew the same deal, no changes needed on my end, with all the same terms (another 12 months) excepting a modest increase of only $x.xx to the hourly rate for COLA. That’s $xx.xx/hour up from $xx.xx. Other than that I can’t think of anything else.

It’s official. You all know my salary now. I literally make $X amount. Note my colorful use of marketing terms like “modest” and “only.” Ha ha ha! Player at work! Also, thinking I was being clever, I provided dollar amounts and not percentages. This was a deliberate attempt to confuse and astound. -Ed

Make the jump to read additional communiques from the “negotiation” process and the surprising twist at the end.
END_OF_DOCUMENT_TOKEN_TO_BE_REPLACED