I’m an official selection at the Holy Shit I Went In The Cannes festival.

The “multiplier effect” is an economics term that means so much horseshit or some such. (Economics is the branch of sociology that specializes in humans fucking each other and not in a fun way.)

I’m here to tell you about the real multiplier effect.

A store notices, perhaps even by accident, that products with a red dot sticker are selling slightly faster than non-stickered items.

END_OF_DOCUMENT_TOKEN_TO_BE_REPLACED

Off the Top of My Head 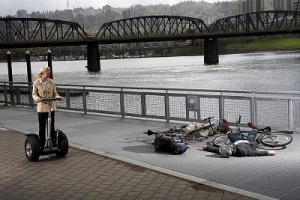 I’m introducing a new feature here in the salt mines fueled by my insatiable desire to innovate. Off the top of my head I’ve decided to call it Off the Top of My Head. It’s part hair-raising excitement, part brainy thought-provoking ideas, a healthy dose of attitude, a smattering of snark, and, of course, snow drifts of dandruff.

Here’s just a little slice of the all-American pie known as Shit I’m Pondering Lately. This is stuff right Off the Top of My Head. (This post contains very little actual research.)

My point? None, really. Except, perhaps, that people like these actually exist. They are out there. They walk among us. They are, like Mr. Rogers likes to say, some of the people in our neighborhoods.

Who has a stronger moral code than humans? Try the humble amoeba. For starters.

Bonus read: Quiverfull of Shit: a Guide to the Duggars’ Scary Brand of Christianity (Gawker.com)

The Business Omen: Bodes of Portends

My organization asked me to select a vendor, conduct negotiations, and secure their services. To that end I put on a suit and tie. I also washed myself. (With soap this time.) This was important.

Naturally I selected a slick company that was “unparalleled” and the “world’s best” at what they did. I was connected with a sales person. We did a little dance.

I filed reports with the CEO about what I learned. He got back to me. He was going with my recommendation.

Company credit card in hand, I inked the contract. I was then directed to the company’s website to open our shiny new account.

Every journey begins with a single step. Each step is an interval where you can be screwed. Enjoy the journey.

“Thanks for choosing ACME Velociraptors Inc. LTD Corp.,” said the salesperson who was now my close personal friend. “I’ll give you a call on Monday to go over implementation.” He even bade me, “Have a nice weekend.”

It’s now Monday. I’m literally stunned that he didn’t call. Am I supposed to wait three days before I call him? I don’t want to look desperate. Oh, forget it. I already emailed him a couple hours ago. He hasn’t called back.

Where did I go wrong? I thought he liked me.

This is one bump in the road too many. Suddenly I don’t feel so good. This is a bad omen, man. This does not portend well. Beware the bodes of business.

Is he born of a jackal or is that me? I’m new to this shit. 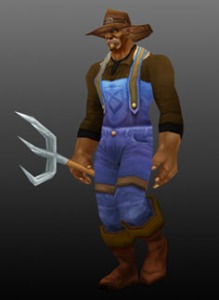 Your humble correspondent pondering tech. And wanting to die.

There’s a crap for that. Stick a pitchfork me. I’m done. Well done. By Satan himself.

The future’s so blight I gotta dig graves. A pitchfork works well for that, right?

So, technology. Let’s talk about that. It’s here. It has landed on our chests like a motherfucking elephant in a COPD commercial. Let me posit this: How’s that technology working out for you?

In a moment I’m going to share my ideas regarding the three-pronged attack on our very existence by technology. (Get it? Pitchfork?) I used to think there was only one prong but that was before spring break. I’ve since expanded my thinking (as well as something else).

Call it my Grand Unification Theory of Technology (GUTT) if you will. It’s time for a gut check. Spoiler alert: Mine has been spilled open by a pitchfork. Dammit. They let anyone own these things.

It’s time to stick ’em with the prongy end. Make the jump and I’ll get to the point.

END_OF_DOCUMENT_TOKEN_TO_BE_REPLACED

A Tom B. Taker Christmas

There it was. In the mailbox. A legitimate Christmas miracle. It was as if a veil had been lifted from my eyes. Instead of darkness I beheld a world of twinkly light.

It was beautiful! I felt alive. I loved everything I could see. I sprinted out into the street and hugged the garbage man. He was beautiful. He looked really surprised. Maybe I should have worn pants but there was no time for that.

“God bless us, every one!” I yelled at the top of my lungs. I’d never felt a stronger sense of belonging.

Yes, it was time for a let down.

END_OF_DOCUMENT_TOKEN_TO_BE_REPLACED

Who is lying to you? Basically anyone flappin’ their gums. But who’s really lying? I think the probability goes off the charts when it’s someone in retail and/or someone trying to sell you something.

For example, one group conducted a study and found that one-third of seafood sold in the United States is “mislabeled.” I think that’s the nice way of saying, “fucking liars.”

The study found that 50% of tuna sold in Washington D.C. restaurants was something described as “cheaper” and that 87% of the time seafood described as “snapper” was actually something else.

Talk about having a whale of a good time!

In other news, the “biggest US honey supplier admits to laundering, mislabeling Chinese honey.” Yeah, Chinese honey is banned from U.S. markets. That doesn’t mean it’s not for sale down the street, though. Why use the real thing when you can acquire “cheap honey” from China? Because, profits.

Earlier this year Apple agreed to pay $450 million to settle claims it colluded with five major publishers to inflate book prices. As part of the deal, Apple, of course, admitted to no wrongdoing.

Also this year Whole Foods Market, as part of a settlement, was ordered to pay $800,000 for overcharging customers. For its part, Whole Foods claimed their prices were accurate “98% of the time.”

AT&T agreed to pay $105 million as part of a settlement for “adding fees that customers didn’t authorize” to phone bills.

When you stop to consider that these are most likely outlier cases, in terms of actual consequences, it is easy to imagine the vast majority of fraud goes completely unpunished. And you can take that to the bank.

Drop on the deck and flop like a fish! You can trust me, your humble guru. I’m not selling anything.

Q. What do you call it when you lie about the mileage when selling a car?

A. Fraud. The NHTSA calls this a “serious crime and consumer fraud issue.” Additionally, between 2002 and 2005 the NHTSA Office of Odometer Fraud says there was a “definite escalation in [odometer] fraud.”

Q. What do you call it when a woman falsely claims to have a tubal ligation?

Today’s axiom is a simple one.

You think I’ve gone too far this time? You say, “Open your eyes, Tom. Look around. You’ll see free markets everywhere you look.”

Bollocks! (If only those had been tied instead.)
END_OF_DOCUMENT_TOKEN_TO_BE_REPLACED