Happy Holidays from the Abyss 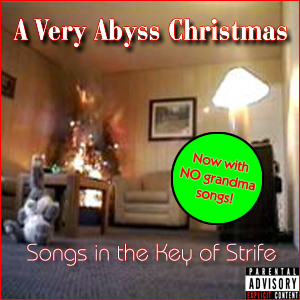 Rare first edition misprint containing the word “Christmas.” Mint in package. Because who would open that shit?

I recently updated by bio to include “singer” and “songwriter.” My dishonesty is your pain. This is where you pay for tuning in.

Behold, the newest member of the Abyss family. A humble little ditty called “My Christmas Song.” Be advised: You should not listen to this.

Fun fact: I was channeling Burl Ives when I laid down the vocal tracks.

Now please enjoy this, my gift to you. It’s the gift of time in the form of one minute of your life you’ll never get back.

A Tom B. Taker Christmas

There it was. In the mailbox. A legitimate Christmas miracle. It was as if a veil had been lifted from my eyes. Instead of darkness I beheld a world of twinkly light.

It was beautiful! I felt alive. I loved everything I could see. I sprinted out into the street and hugged the garbage man. He was beautiful. He looked really surprised. Maybe I should have worn pants but there was no time for that.

“God bless us, every one!” I yelled at the top of my lungs. I’d never felt a stronger sense of belonging.

Yes, it was time for a let down.

END_OF_DOCUMENT_TOKEN_TO_BE_REPLACED 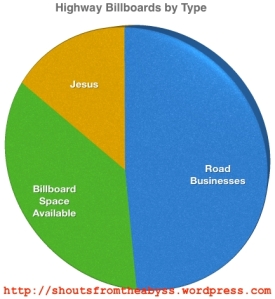 Highway To Heaven starred Michael Landon as an angel on probation, sent to Earth and given assignments by The Boss to help troubled souls.

Shouts From The Abyss stars yours truly as a self-proclaimed guru of negativity, given (purloined) a blog which serves as a metaphorical highway where daily poop bullshit is dispensed to The Reader.

The parallels are uncanny.

Hell, I’m just like Johnny Appleseed only slightly different. And, like Mr. Appleseed, I’ve got places to go and things to do. For that I will, occasionally, use a highway.

Highway to Hell was a rockin’ little ditty by AC/DC.

One thing is for sure: That’s a lot of highways! And the other day I was on one of them.

Verily I say unto you, the highways shall be covered with billboards and they shall be legion but do not be tempted by the advertising messages contained therein lest thou’st risk thy immortal soul for they are abomination.

—The Book of Guru, Transportation Chapter

It’s not the destination, it’s the journey. A serendipitous journey dappled with billboards containing messages like “Eat at Joe’s” and “Billboard Space Available.” Hell, who wouldn’t appreciate a journey like that? God forbid that even during the act of driving we might temporarily forget that the world is 24/7 after our wallets.
END_OF_DOCUMENT_TOKEN_TO_BE_REPLACED

In honor of a fun-filled feckless Friday, the word for today is FREE. I recently found enough free music to fill an entire CD. Woot!

This group goes by the name the “Nashville Session Players.” Their music is varied although mostly country and western. They put out politically-charged songs about religion, the treatment of our soldiers, anti-war themes, poverty and the plight of the homeless in America, and don’t seem to be none too partial to Congress and George Bush, either.

Their first album was Homeless In America back in 2005. Then came Gonna Rise Up in 2006. Their third album is self-described as “non-partisan” and “mostly inspirational” (unlike the previous two albums) is American River released in 2007.

The fourth album, entitled Who Would Jesus Bomb, was released in 2008 and contains 20 songs. The entire album is available for free download as high-quality 320Kbps MP3 files.

You can find all 20 songs plus 16 other bonus songs in 192Kbs quality here:
Freedom Tracks Music

When it comes to music, my first criteria for enjoyment is musicness. Then comes genre and, finally, the lyrical content and message. I like a lot of music where I don’t agree with the message at all. (Some of Type O Negative’s themes fall into this category.) Even if you don’t agree with all of their content, which can be very powerful at times, and, maybe a bit too partisan for some, you still might enjoy the music. On the other hand, if you adore George Bush, some of it just might piss you off.

It’s free. Maybe it’s worth a try. Consider it my free gift to you. Happy Feckless Friday!