Off the Top of My Head

I’m introducing a new feature here in the salt mines fueled by my insatiable desire to innovate. Off the top of my head I’ve decided to call it Off the Top of My Head. It’s part hair-raising excitement, part brainy thought-provoking ideas, a healthy dose of attitude, a smattering of snark, and, of course, snow drifts of dandruff.

Here’s just a little slice of the all-American pie known as Shit I’m Pondering Lately. This is stuff right Off the Top of My Head. (This post contains very little actual research.)

My point? None, really. Except, perhaps, that people like these actually exist. They are out there. They walk among us. They are, like Mr. Rogers likes to say, some of the people in our neighborhoods.

Who has a stronger moral code than humans? Try the humble amoeba. For starters.

Bonus read: Quiverfull of Shit: a Guide to the Duggars’ Scary Brand of Christianity (Gawker.com) 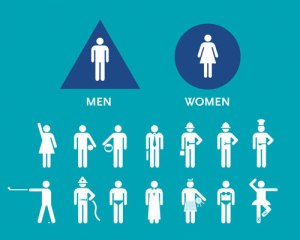 What? Another DIY post? Wow. I must really be in the mood to be helpful.

Target, apparently a retail establishment that peddles cheaply-made crap (most of it likely sourced from overseas and presumably made with cheap labor) recently announced it was taking down gender-based signage in their stores. The new policy applies to departments like “toys” and “bedding.” Clothes, apparently, still have a long way to go, baby.

The old way of shopping worked something like this:

“Hey, we gotta get a toy for Pat. The kid is having a birthday soon.”

“OMFG! What gender is Pat? Do we even know?! That’s it, man. Game over. Stop your grinnin’ and drop your linen.”

“Whoa. Easy there. Calm down. We know what it is. Pat is currently a boy.”

“Whew. Okay. Close one. Let’s go to Target. We’ll head for the section labeled Toys For Boys. Make no mistake about it. We will not go down the aisle labeled Toys For Girls. No fucking way!”

At the store: “Now these are toys for boys. Get the erector set, Lincoln logs, Army men, flamethrower, truck nuts, 8×10 color glossy of Mike Rowe, a jumbo jar of Rambo sweat, and box of Cuban cigars.”

Now, thanks to Target, you can shop the new way:

“Oh, noes. The ‘boys’ and ‘girls’ signs are gone. Now we’re forced to choose from aisles simply labeled ‘toys.’ What are we supposed to do now? We’re gonna die!!!”

Don’t go sticking your head in an Easy Bake Oven just yet.

END_OF_DOCUMENT_TOKEN_TO_BE_REPLACED

History is written by the victors.
–Winston S. Churchill

I have this personal pet theory. It goes a little something like this:

Behind any great person is a different story that contains actual truth.

What do I mean by this? It’s time for a tale of hungry dogs, drowning by garden hose, buxom secretaries, altered birth certificates and who’s car is parked next door.

END_OF_DOCUMENT_TOKEN_TO_BE_REPLACED

To me, a Topsy-Turvy is worse than a Catch-22. The latter is a logical impossibility due to contradictory rules. Topsy-Turvy, on the other hand, is pure and utter bullshit.

A new term has cropped up recently to describe the act of publishing a person’s real name, address and other personal information on the internet with the intent to cause harm.

Yes, it happens so much there’s a word for it now.

Years ago, long before it was trendy, I was doxxed. I had banned a couple of racists from an online forum and they were none too happy about it. So they threatened to kill me. “You have 24 hours to get out of town. Or else.” Seriously? You just did that? I didn’t realize I lived in the town of Tombstone. Oh, look. There goes a tumbleweed. Somewhere a chicken clucks.

I reported the emails to the police. They contacted me and I showed them the printouts. “That happened online? That’s not real. There’s nothing we can do.” True story. Good times.

Later the racists doxxed me on Craigslist, published photoshopped pictures of me and my wife, and took credit for killing my missing cat. Craigslist wouldn’t reply to my requests for help. Remember, I was years ahead of my time. Again, I turned to the police. I had proof I had been doxxed. Their reply? “Nothing we can do about that. It’s not illegal. That’s public information.”

Fast-forward to today and the Topsy-Turvy part: Oregon currently has about 55 “juvenile sex offenders” attending class in 24 different school districts. Parents and other students are not notified of their presence. Why? Because of federal and state laws that protect the privacy of the sex offender student.

How do you know when a situation is Topsy-Turvy? When it only flows one way – against you – at every possible turn. That’s Topsy-Turvy!

You may remember the name Ethan Couch. Recently his name has been coming up in the news again. He’s the Texas teenager who used the “affluenza” defense to get out of serving jail time for killing four persons while driving drunk at over three times the legal limit. He was 16 at the time when he crashed into a stalled pickup on the side of the road.

A CBS television station in Dallas, Texas, reported yesterday that Ethan will be released “very soon” from about a year spent in rehabilitation. Once released, he will be on ten years of probation. He will not have served any jail time for his actions.

And now some Topsy-Turvy: A 90-year man was arrested and taken away, in handcuffs, by Fort Lauderdale police. His crime? Feeding the homeless.

For 23-years Arnold Abbott has operated a non-profit organization called “Love Thy Neighbor” which distributes hundreds of meals per week to the needy. The mayor of Ft. Lauderdale supports a city ordinance that essentially bans food sharing among local citizens.

A killer of four walks free among us while a 90-year old man is “dragged away in cuffs” for feeding hungry people and threatening the rights of young people to act like assholes. That’s a whoop ass can full of fucking Topsy-Turvy.

Gone To The Dogs, Baby, Gone

I’m back in office (or, as I like to call it The Love Den) after a weekend of travel. Maybe I’ll do a travel post. Or maybe, like always, I’ll plan on it and never get it done. Anyway, this is my first post in a few days that wasn’t written by breaking my fingers on a tiny electronic keyboard on an iPad. As such, I’m pretty happy. -Ed.

Are things getting better or worse? My personal theory is that things have always been shitty and it’s a remarkably consistent thing. Were people more “evil” in medieval times or in present day? My guess is that both were about the same. The only difference is that we think things should be better today and when they’re not our brains incorrectly interpret the difference between reality and perception expectations as some kind of disconnect.

Our helpless brains then think things like, “Things are going to hell.” Only they’re not. The more things change the more they remain the same.

I remember when I was a kid. A service dog was something limited to blind and deaf people. These were highly trained animals that were rarely seen in public. And when they were nobody questioned their legitimacy. Why would we? What kind of freaking asshole would you have to be to take advantage of laws for disabled just because you want your pet to tag along when you go shopping or out to eat?

We also used words like “please” and “thank you” and held open doors for other people.

In today’s world an amazing number of us have no such ethical quandaries. We want something ergo the ends justifies the means. Period. The only criteria that must be met is that we want it. And, let’s be honest, that’s a pretty darn low standard to meet.

Park in a disabled parking space? I’ve never done it once in my life. A few months back I fell out of a boat and smashed my ankle on a rock while whitewater rafting. The damn thing still hurts like hell. I could have asked my doctor (if I had one) to fill out the paperwork for a temporary permit. Why the hell would I? I can limp the extra 20-50 feet just fine. What kind of an amazing prick must you be to think you are entitled to take a parking space from someone who really needs it.

I recently spoke with a person who freely admitted to doing it. And why wouldn’t they? In their mind there was absolutely nothing wrong with it. No recognition of ethical boundaries translated into no reticence about freely admitting what they had done. Their brain literally couldn’t comprehend their might be something wrong with such behavior. It would conflict with The Want.

This same person, though, had a major issue about people touching her dog. The dog is high strung and has a lot of anxiety. It doesn’t like to be touched except on its own terms. But when she took the dog out in public, like grower’s markets, strangers would pet the dog without asking and without permission. This was greatly upsetting to her.

Later, she took us to a public park where there were signs posted that said, “No dogs allowed.” It never crossed her mind that her dog shouldn’t be there. Run loose, doggie. Be free!

Her mind was literally incapable of discerning the reality of her beliefs and actions. Under one set of mores people were rude assholes for breaking rules and in the other she saw nothing wrong with her behavior. Both were able to sit comfortably in her brain at the same time and she never noticed anything wrong about it.

When I lived in San Diego I had a daughter who was deathly afraid of dogs. They would make her scream, shiver and become emotionally withdrawn. The fear may not have been realistic or logical but it existed nevertheless. As such, we didn’t take her to public spaces like dog parks. We’d search out public parks where dogs were prohibited. There was one of these near the ocean where we liked to go to fly kites.

There were other dog-friendly places. They even had their own beach. But invariably someone would show up and unload their dogs and let them run free. The dogs would rapidly approach us and the owners would say things like, “Don’t mind Fluffy. He would never hurt anyone.” Well I guess we have your word on that, don’t we? The word of a known criminal. Meanwhile the day was ruined, for us, with my young daughter back at the car and wetting her pants.

Well played. You get your dog area for backup and our space as your primary. You probably didn’t want to go there because there were too many dogs, right?

So are we bigger assholes to each other today or does it only seem that way? We certainly seem more narcissistic and masturbatory. But back then there less rule of law and other things in abundance like slavery, racism, gender oppression, genocide and more. Maybe as a society all we’ve done is redistribute the evil in new and interesting ways? Maybe the amount always must remain constant?