Your humble correspondent pondering tech. And wanting to die.

There’s a crap for that. Stick a pitchfork me. I’m done. Well done. By Satan himself.

The future’s so blight I gotta dig graves. A pitchfork works well for that, right?

So, technology. Let’s talk about that. It’s here. It has landed on our chests like a motherfucking elephant in a COPD commercial. Let me posit this: How’s that technology working out for you?

In a moment I’m going to share my ideas regarding the three-pronged attack on our very existence by technology. (Get it? Pitchfork?) I used to think there was only one prong but that was before spring break. I’ve since expanded my thinking (as well as something else).

Call it my Grand Unification Theory of Technology (GUTT) if you will. It’s time for a gut check. Spoiler alert: Mine has been spilled open by a pitchfork. Dammit. They let anyone own these things.

It’s time to stick ’em with the prongy end. Make the jump and I’ll get to the point.

END_OF_DOCUMENT_TOKEN_TO_BE_REPLACED

Khan With The Wind 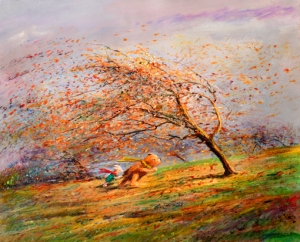 I sit here, my tushy gleefully ensconced in a chair of rich, Corinthian leather, in the mood to share a story that really blows. -Ed

It’s been about eight months since we moved to the big, big city of Portland, Oregon. The snow storm was fun. Sure, it wasn’t the 50′ of being buried alive of my dreams, but it was cute. We spent seven cozy days “trapped” in our home.

Then came the wind.

Last night the wind mercilessly ravaged our house. As much as I’m loathe to consider any weather-related thought, it finally crossed my mind: Jeez, when is the wind going to die down?

Sure, I enjoy as much as the next person finding my garbage cans tossed about and the contents strewn about the neighborhood. Who doesn’t? But even that can eventually get old.

What gives? Is this typical for Rip City? Or is it something new, perhaps a harbinger of doom?

I’m betting on the latter. Take off your helmet, stay awhile and listen. Lend me your ears because I’ve got some of the indigenous lifeforms ready to help us bore down into the story.
END_OF_DOCUMENT_TOKEN_TO_BE_REPLACED

Blame It on Roku

Well, well, well. Netflix has had a busy week. First they announced they are raising their rates by 60%. In my humble opinion, in a single stroke, they went well out of their way to create ill will where previously there had been none.

Smooth move, Ex-lax. You just pissed off a lot of people and made them start thinking about taking their business elsewhere.

I don’t want to bury the lead (like I usually do) so I’ll interject this right now: Netflix has been down all day.

Worse, they advise you to visit a page on their website. When you do, they claim that their systems are completely operational and then tell me to call the company that make my Roku device.

“Don’t call us! Call that other company. You know, the company that makes it possible for us to run our business and deliver our primary product. Yeah, fuck them. We’re clever that way. Our Netflix scientists have discovered that pushing our problems onto innocent third parties seriously saves us a lot of money.”

Come to think of it, the Netflix service on the Roku has been sucking some majorly serious ass for a couple of months now. I’m talking about lots and lots of errors. Lots of little images that don’t load. Entire categories that remain blank and won’t let you select anything. And even when the system is working, the service is sluggish as hell, like when adding or removing a series from our instant queue. The refresh time is unbelievable.

Another problem: The streaming service almost never has the movies that we want.

The most recent example of this was yesterday we saw Jennifer Aniston on the Actor’s Studio. They mentioned a movie called The Good Girl. I’d never seen it. So we flipped on the Netflix, did a search and got nada. Another buttfucking courtesy of the Netflix. I think that is like ten searches in a row where search for streaming content has failed.

So what are the primary problems with Netflix right now:

And this is when they choose to raise prices? Wow.

I’ll say this. Until now I’ve been a loyal fan. I would have absorbed a $1/month rate increase without complaint. That would have been a 10 percent jump which is still pretty amazing in this economy and with an unemployment rate of 9.2%. I may not have graduated with a degree in business from Harvard, but something tells me the current economic climate may not be the best when it comes to jacking the rates on an entertainment product that competes for increasingly scarce disposable dollars in a budget that is shrinking or under threat in most households.

So today I explored the other channels on my Roku device. Unlike Netflix they all worked just fine. And I got to watch something extremely interesting and unusual.

By the way, if you want to find the status of the Netflix service, there is a way to do it even though Netflix provides none. Go to a website called “Down Right Now” which uses “crowd-powered service monitoring.” Sadly this a website like this fills an important niche as service providers fall woefully short.

I’m not quite ready to give Netflix my lowest possible rating but they had better watch it, because they are getting very close.

Goodbye means we are done

Rude? What is this "rude" of which you speak?

It’s been a couple of months since I left my old job. Yeah!

Today I wish to present a blast from the past and recount a conversation I had with my office manager that took place shortly before my last day of work.

The background information is this: I worked at the company for over five years. During that time, among my other duties*, I programmed their ecommerce website entirely from scratch. Because the boss was so picky, only a homegrown and highly-customized solution would suffice.

* I was also forced, against my will and under threat of termination, to do things like: Retail sales floor, customer service phones, production, secretarial and janitorial. I naively thought I had been hired as “webmaster” but found out that even job listings can be viciously “bait and switch.” In fact, my actual job title was often just a tiny slice of my day.

So there I was, called into my manger’s office, and this is pretty much how it all went down:

“After you’re gone, when we find bugs in the software, you’ll fix them for free, right?”

Holy crap! What a thing to say. This really floored me. I mean, how rude! The sheer audacity of it is truly staggering.

I’m still so proud of the way I responded.

“Absolutely not.” I was unequivocal.

The manager had the balls to put on a bewildered look. “How can you say that? You wrote it, right? Any bugs in there are your mistakes. Don’t you stand behind what you do?”

Sad. This was truly sad.

“Sure I do. But let me ask you a question. When is the last time you heard something like this? An employee leaves a company and two weeks later a mistake of theirs is found. Have you ever heard of that employee going back to the job and fixing the problem for free?”

Even amongst all the greatest assholes of the world this caught my manager flatfooted. Yeah, delicious!

“Look,” I continued. “When I was working as an employee for this company, I gave it my absolute best. My goal was to provide the highest quality product I possibly could. Even so, there were two problems. First, I’m human, and I will make mistakes. They will happen. Second, I had absolutely no control over my work environment. Computer programming ain’t exactly like painting the Sistine Chapel, but it ain’t ditch digging, either. It’s hard and requires intense concentration and logic. It’s not exactly the kind of work that can be done in a blender. Yet that’s the environment that has been forced down my throat for the last five years. That sort of environment increases the error rate. I’m sorry about that, but that’s just the way it is.”

“So what happens when we find bugs? We’re screwed?”

“As I see it, you have three choices. Live with it, fix it yourselves, or hire someone to fix it for you. As your employee, when mistakes were found, I could fix them as part of my day. You didn’t require me to clock out and work for free. As your ex-employee, you still have the same option, as long as I remain willing and available, of course.”

And so it came to pass that I would not be fixing every bug from the last five years and doing it for free.

After I left the company we briefly negotiated a renewable weekly contract where I would work from my home office for 20 hours a week. But their final offer was insultingly low and I refused. I now do ongoing work for them, as needed, but at my final offer of an hourly rate, not theirs. After five years the tables have finally turned.

And yes, if I’m working as a contractor, I stand behind my work. That means I fix bugs for free. But I also control my work environment.

Sometimes it is good not to be the employee.