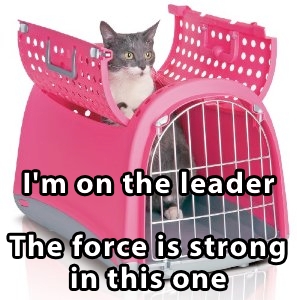 A friend called and asked a favor. I’m not exactly the kind to give the shirt off my back so I was immediately wary and assumed a defensive stance. But it turned out all he wanted was to borrow our cat carrier. I said yes. I figured, what the hell.

What is it to actually be considerate of a person other than yourself? And why has this become such a lost art?

Recently it was the Fourth of July. As such, I had strongly considered keeping the cat carrier handy in case the asshole neighbor(s) shot fireworks at our house and set it ablaze. I wanted to be be disaster prepared and able to whisk my kitties away to safety at a moment’s notice.

Alas, I was afflicted by inertia and never got off my lazy ass to get the damn thing. I decided to roll the dice and play the odds. After all, my house wouldn’t burn down. Probably.

Besides, the cat carrier had been shoved in the attic and retrieving it would be a major undertaking. Long story short, we lived through Big Noisy Flashes Delight Small Minds Day and the cat carrier was all but forgotten.

The call for that favor came in. I said, “Sure, you can borrow my cat carrier. When do you need it?”

Thus, we had a plan. It was now time to do my part. I got dressed, grabbed my keys and went out to the garage. The lock on the door is defective and getting harder to open each time we use it. Luckily I was able to jiggle it open.

At great risk of life and limb I maneuvered our step ladder carefully through precariously-balanced mountains of hoarder junk. It was irritating. I did it carefully, though. I didn’t want to be another crushed by stuff hoarder statistic. Maybe after we’ve lived here four years we’ll get around to unpacking.

Somehow I got the ladder into the house and positioned under the access to the attic. It’s not exactly a heavy duty ladder and it wobbled ominously a few times almost sending me on my way to multiple painful deaths. But that didn’t happen. I survived. Reaching the top, I pushed up on the piece of wood that separates our home from the omnipresent insect horde above. I blinked furiously as dusty detritus burned into my eyes. Ouch. That’s gonna leave a mark.

I hauled myself up, grabbed the damn thing, and soon was back safely on the ground. I had done it. I paused to savor the moment. Success. It actually felt good doing something for someone else. I was surprised by this unexpected emotion.

I pulled the board back and blocked off the attic. I folded the step ladder and returned it to the garage. Re-locking the garage door was dicey but I got it done. I thoughtfully put the cat carrier by the front door so it would be ready when my friend stopped by.

Coughing a little, I dusted myself and checked the time. My friend would be here any minute. I made it in under the wire.

“Never mind,” said my friend. “I don’t need your cat carrier. I just borrowed one from my neighbor.”

Look on the bright side, I thought. At least I’m a year early on getting ready for the next Fourth of July.