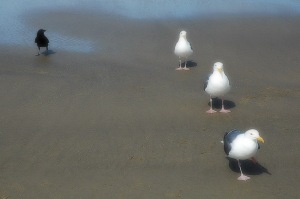 Next time on Biography…

I’m on the outside
Lookin’ in

It’s trendy these days, or so it seems to me, for some among us to run around having conniptions of kittens because some law might apply to them and … gasp of horrors … they never had the opportunity to sign off on it first.

Well, la dee frickin’ dah! Who the fuck are you? Apparently I forgot that any one of me is worth a hundred of you. You’re special. You’re important. Me? I’m the official spokesperson for The Rest Of Us. Also known as the Wretched Refuse, the tired, poor huddled masses of the homeless, tempest-tost. I’m the elected leader of those not worthy to be ground to mush to fill the empty spaces in the waffle treads of your Nike footwear.

I’m the stranger in a strange land. As I look around and apply logic to what I see, the message comes in loud and clear. I do not belong.
END_OF_DOCUMENT_TOKEN_TO_BE_REPLACED

I Piss On Dothraki Laws

We were at a busy four-way stop. Amazingly things were proceeding apace. Each car was doing what it was supposed to be doing. It was like winning the lotto.

Then, finally, just before it was our turn, everything went sideways. Right on cue. The car to our right that was supposed to go next just sat there, not going and stuff.

All motion stopped. Suddenly we were engulfed in a dead calm. It was surreal. Somewhere a bald eagle screeched. I heard the shake of a rattlesnake’s tail. A chicken clucked. A fly buzzed. A tumbleweed drifted through the intersection.

All heads turned and everyone stared at the idiot. What the hell was going on we collectively wondered.

Then, with a start, the car leaped forward. Like my dad used to say, “Put it in ‘L’ for Lunge.” In a grand elegant arc the car made its left turn and aimed right at me. “Oh my God,” I whispered breathlessly into my crash helmet. “One bogey passing on the left.”

And then I saw it. There, behind the wheel, a woman was driving with one hand, had an abominable phone pressed against her face, and was gesturing wildly with the other.

She was talking on a phone!

My brain quickly calculated the meaning. Why, that’s supposed to be illegal now! This criminal had just ruined the four-way stop dream of perfection for all of us. Veins popped out on my forehead in a full relief map in the shape of Florida. My hands gestured, too, and with every force of my being, I screamed at the top of my lungs, “We’re trying to live in a society here!”

I think it was right around then that I had my epiphany. I’m willing to share it with you now. Obeying the law is for suckers.
END_OF_DOCUMENT_TOKEN_TO_BE_REPLACED

Tales of the Moved

And now a few exciting storyoids from the Mover’s Notebook…

The greater the change, the greater the likelihood it will stab directly into your heart like a stiletto and abscond with your life.
–Tom B. Taker

As some of you may already know, my wife and I recently made a big move. Excepting a trip to Mars (where I’m currently on file as a one-way volunteer) it ranks as pretty substantial as far as moves go. We went from the quiet rural lifestyle of a tiny goat farm in the Himalayas and a village of 42 souls to one of the most urbane existences possible in the heart of a big city: Portland, Oregon.

What follows are a few of our observations and experiences.

I hate people who think they are above the law. How rude! Such bad form! Like people who park in the fire lane to use the ATM rather than walking the 20 feet from a legitimate parking space. Or people who say they made charitable donations on their tax returns when they really didn’t. I loathe and despise that sort of thing.

People who park on the wrong side of the street also make that list.

Yet here, in Portland, there’s so much of it that it’s hard to imagine that it’s actually illegal. In fact, it almost seems like parking on the wrong side of the street is the norm and parking legally is the aberration. It’s that prevalent.
END_OF_DOCUMENT_TOKEN_TO_BE_REPLACED

Logic Shot Through The Heart

The NRA is the winner of this year’s SFTA Batshit Crazy Award. Congratulations! You earned it.

The existence of the National Rifle Association begs the question, “Can you win an argument with a crazy person?”

The answer, of course, is, “Hell no. BANG. BANG. You’re dead. Now don’t say shit like that ever again.”

I’ve been trying to think of an analogy to start this post. I utterly failed so we’ll go with the ever popular cookie.

“Are you fucking serious? You were totally wrong about that four years ago. Totally. It is scientifically impossible to be any more wrong than you were. I’m still here. I ate the cookie and I didn’t die. You were the worst wrong of all time. You hold the world record for wrongness about that cookie. How do you live with the fact that you were absolutely wrong in every possible way?”

“Easy. I figured out that the cookie had an evil plan. It decided to kill you later. It didn’t kill you the first time because it wanted to lull you into a false sense of security. The next time you eat the cookie you will die. You’ll see. That’s why I was wrong. I failed to truly understand the evil and deviousness of that cookie.”

Fool me once. Shame on you. Fool me twice? You must be the NRA.
END_OF_DOCUMENT_TOKEN_TO_BE_REPLACED

Who put the MF in Global?

I love things hidden in plain sight and double meanings. They give me a merry tickle. Well, most of the time.

I don’t know anything about investing, but if anyone had ever approached me with an “opportunity” to invest at a company named MF Global I’d probably respond by kicking them in the nards. Opportunity, indeed!

Now that’s a portfolio that holds my interest.
END_OF_DOCUMENT_TOKEN_TO_BE_REPLACED 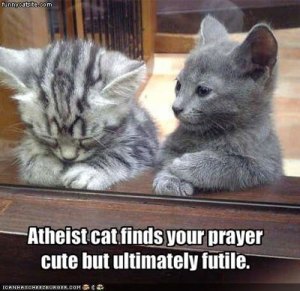 Living in a small town can have its ups and downs. Besides all of the other pitfalls I’ve mentioned before, you have also got to be careful with your secrets. Unless you are in the majority, it can be unwise to reveal your political party or religious beliefs lest you be ostracized, burned at the stake or you particularly enjoy watching bricks flung through your living room window.

That means I generally keep my atheist status on the down low. There are a lot of God-fearing folk around here. Seven years ago I was even asked by a prospective employer about my religious beliefs. I diverted the question and played it off ambiguously and got the job.

That employer didn’t find out the truth until later. Mwuhahaha!

So the other day I was shooting the shit with the boss and I decided the time was right for a reveal. It was sort of a big deal since he’s very religious. But he’s also a very decent and caring guy and, I think, a critical thinker.

I started things off with a query. “If you had to guess, what do you think my religious beliefs are?” END_OF_DOCUMENT_TOKEN_TO_BE_REPLACED