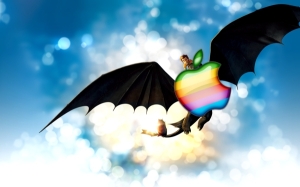 It’s hard to believe I worked on this graphic all by myself.

Tim Cook struts out on stage. Music plays. He holds up a device which has 99.9% of the same DNA as a device you already own.

You update that device to the las test and greatest operating system which is essentially the same except it provides more ways for money to flee your wallet and join up with the mothership wad of cash at Apple.

That update makes your device no longer worky.

What does Apple call a person who updates their software on the same day a new version is released? An unpaid beta tester.

Now I ride in like the Lone Ranger 2.0 to save the day. Here’s how to survive an iOS update.

First, take a deep breath. The principle of patience must come into play. Life is short but if you update too quickly it’ll be even shorter. 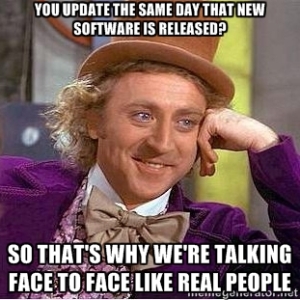 So you wait. At least one day.

For the one reader who has stuck with me until now, what then?

Go to Twitter and figure out the hashtag for the update. For example, this week it was #IOS81. Click on that hashtag. Read up.

What’s the general consensus? What’s the mood? If you see a lot of statements like, “Thanks a lot, Apple, now my iPad is a brick,” waiting might feel just a little easier.

Repeated this procedure when they release the incremental in the next two hours. Did they just throw fuel on the fire?

Avoid zero day released and the first incremental or two. By the point three it just might be time to start taking it seriously. Are batteries lasting longer again? Does wifi actually work?

During the wait time you’ll feel very along. You’ll feel abandoned. There will be no official word from Apple. They won’t be on the forums. They won’t send you an email. They won’t reach out with a tweet. So you’ll sit and wait. I recommend during this period of time that you invest in a bottle of Templeton Prohibition Era Recipe Rye.

After several months of waiting it’ll be congratulations. Your long term strategy has paid off. You’ll be the proud owner of a working device. Just in time to watch the next Tim Cook floor show, too.

Friday morning my wife and I were in Portland, Oregon, on our way to the zoo. (More on that later.) We had ridden MAX, the light rail system, into downtown and had to transfer lines in Pioneer Square (AKA Portland’s Living Room).

While there, we saw the new Apple store. It was early in the morning and it wasn’t opened yet.

The architecture was Lego Meets Glass. It was a rectangular building with a long back wall covered with assorted goodies and three other walls consisting of giant panels of glass. The simple design spoke of transparency, projecting an airy, light, sense of come-see-what-we’ve-got. Sleek, clear, simple and white. And, although I didn’t know it at the time, there’s also a lawn on the roof.

Inside one solitary worker sat at a desk feverishly clicking, thinking and doing about Apple stuff.

In front, slowly traversing the entire length of the store at a leisurely pace, were two security guards. They looked bored out of their minds. I forgot to look to see if they were armed, but we are talking about an Apple store, right? The place was obviously where riches were stored.

There’s not going to be an Oceans 7.1.1 heist here today. Not on my iWatch!

Suddenly a man approached the front of the building. The security guards sniffed him but apparently he checked out. He arrived at the front door and waved at the man inside. He was special. He measured up. He got to go inside.

I’d heard that Apple stores have something called a Genius Bar but I didn’t see a single bottle of booze. Hell if I was going there for a drink.

Unfortunately we couldn’t wait around all day. We had a train to catch. Before we turned away I saw a security guard hock up a loogie the size of an iPod Nano and launch it on the shiny white steps. The guards leisurely turned and began shuffling towards each other again. A vision of the North Korea border suddenly leapt unbidden to my mind.

I felt tingles. This portended good. Suddenly I knew the trip to the zoo was going to be something special. Things were happening. We walked a block and waited for our ride while looking at a Nike swoosh symbol the size of the Titanic.

We live in a society

I am here to restore your faith in humanity. If you believe that humans are a slug upon the universe and that Earth is the slime trail it has left behind.

Now all we need is a dash of salt and a pint of beer. (To be dumped on the slug.)

society: the aggregate of people living together in a more or less ordered community. “More or less!” Ha ha ha! At least they got that part right.

I read today from the Book of News, Human Behavior, Stockholm Syndrome, Chapter 6:

A “middle-aged” drunk man on his way home from a party fell off a subway platform in Stockholm, Sweden, hit his head on the tracks, and knocked himself unconscious. And, as luck would have it, a train was right on the way! You might think that’s the whole story, but wait! There’s more.
END_OF_DOCUMENT_TOKEN_TO_BE_REPLACED