I’m Going To The Grocery Store

Can you see me? Click to enlarge. Source: Wikipedia.

They got edible cactus in a jar
Mixes and accessories for my bar
Breakfast cereal that comes in a box
Bagels, cream cheese and even the lox
Fruits thoughtfully sealed inside of wax
Winged feminine products sold in packs
Only forty-two varieties of Wheat Thins
Toilet paper with gels squirted in
Everything you ever needed and more
You’ll find it all at the grocery store!

A wise woman once said, “I learned a hard lesson this day. … [N]ever and I repeat NEVER EVER take Tom shopping again!!!” This person was my wife of two years ago. Not my wife of today. Apparently the two have never met.

Our story begins and ends in a grocery store…
END_OF_DOCUMENT_TOKEN_TO_BE_REPLACED

It’s time for another fantastical episode of “Behind The Tweets.” Be careful not to step in anything.

Deep inside your hole there’s a soul you don’t wanna see. #SwitchTwoWordsInLyrics
—As seen on Twitter 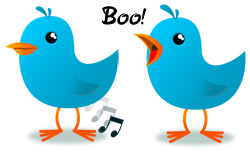 This New Year’s I hatched some lofty goals. One resolution was to memorize the words to every Elvis Presley song ever recorded. By lucky coincidence, I’m already part of the way there. Another was to invent a 27th letter of the English alphabet. I think that would blow the lid off the grammar world quite swimmingly.

And, last but not least, I wanted to invent my very own “hash tag.” Thanks to a lyrical fuck up while singing in the shower, I may have just gotten my wish. I guess it’s time to notch another achievement in my over-growing belt!

What the bloody hell is a “hash tag?” I wish I knew. It would make inventing one so much easier!

Short messages on services such as Twitter may be tagged by including one or more hash tags: words or phrases prefixed with a hash symbol (#), with multiple words concatenated.
–Source: Wikipedia

My generous contribution to the hash tag genre is #SwitchTwoWordsInLyrics. Simply put, all this means is to tweet a short snippet of song lyrics (perhaps a line or two) and do nothing except switch two words (and only two words) to give the lyrics a new twist.

As you can see in my tweet above, I applied this idea to the opening line in the song (Can’t Get My) Head Around You by The Offspring. I have to admit, I really liked the word “hole” in that context. It’s just gaping with mystery and drama.

I have just slapped your face with my proverbial blogging gloves. Will you accept the challenge to come up with an example of #SwitchTwoWordsInLyrics of your own? Or will you laugh in the face of this challenge and respond by continuing to post interesting things? (The chicken’s way out.)

I’ll be watching the hash tag stream with baited breath to see what you can come up with.

Don’t give up too quickly. It’s harder than it looks. I think I just got damn lucky on my first attempt. Good luck!

To get you in the mood, here is one rockin’ little ditty.

What do you know about WordPress tags?

Do you use them? Give them any thought at all? Do you ever go exploring blogs by tag?

No great insights here. I haven’t studied them that much yet. But I did notice that recently I was #1 for the poop tag. Still am! I have to admit that made me very happy. There is nothing inherently “negative” about poop but somehow it became a fixture around here. And I wouldn’t have it any other way.

Did you know if you have the “tag cloud” enabled on your blog, clicking a tag link there will show posts with that tag from your blog only? But that if you click the tag in the post’s header (or footer, depending on the theme) it will take you, instead, to the page for all WordPress blogs with that tag? It’s pretty neat.

What else have you learned? What is your experience? Got any funny stories? Maybe you’ve been #1 for a tag a lot? Or maybe you have questions about tags, too? If so, let me know.

Note: I know this is a super-lame post. I waiting too long and gave myself about four minutes to write it. Epic fail!

Edit: By the way, I just noticed this is my 500th post. I guess that puts me knee deep in the hoopla! 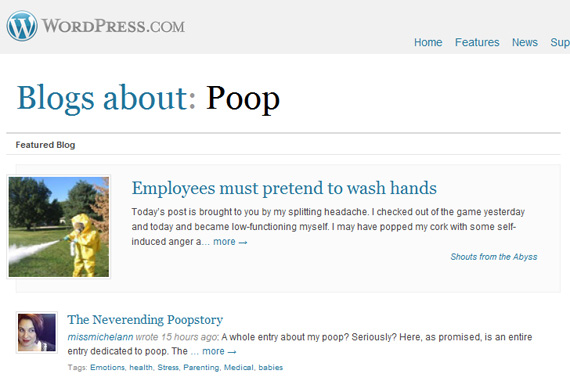 I just checked and this is confirmed. I shit you not!

As of today, right now, I own the WordPress “poop” tag! I’m so happy! I mean, just look up there and marvel at it. WordPress says that right now, I am the “featured blog” on the subject of poop! Somebody pinch me! I’ve reached the top of the heap, and I can tell you, it is good.

This is not a drill!

I’ve wanted this so bad I could taste it. It’s been a goal for so long, now that it has been achieved I’m not quite sure how to feel. Yes, it’s great, don’t get me wrong, but now what? I’ve never actually met a goal before. What is this strange feeling called? Someone, help me please! What comes next???

Don’t be a turd. Help me celebrate!