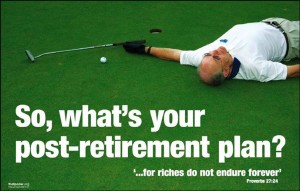 I’ve often talked about the “three-legged stool” on this blog. No, you don’t have to leave. This post won’t qualify for a certain tag that shall remain nameless. I’m going to keep this post on a higher, more sophisticated plane.

So often, in fact, that I should probably elevate the topic to the level of a category so you can ignore all the posts equally at the same time. But that would be convenient therefore I won’t do it.

The future is something which “occupies” my thoughts from time to time. (Yes, my brain has little protesters in it.)

To refresh your memory, the “three-legged stool” is a metaphor rolled out around the time that piece of sassafras Ida May Fuller clutched her first Social Security benefits check in her kung fu death grip. I remember it well because I was there. On the floor. Licking her ankles. Whispering hotly, “Be my sugar momma? Mommy? M to the O to the M M Y.”
END_OF_DOCUMENT_TOKEN_TO_BE_REPLACED

Real class and warfare that go together

Do you remember what you were doing on Feb. 12, 2010? Me either. The only record I have of that date is a lame post about Valentine’s Day and chocolate. While the biggest worry in my life was some inane holiday, a 23-year-old young man was having his life terminated by an asshole of gratuitous evil.

On Feb. 12, 2010, it is reported that a man named John Goodman (no relation to the actor) was driving in his Bentley convertible. He ran a stop sign, smashed into a car being driven by 23-year-old Scott Patrick Wilson, and fled the scene. Wilson was left for dead, in his overturned car and at the bottom of a canal. The accident ended Wilson’s life.

Goodman was found later and had a blood alcohol level that was twice the legal limit.

The catch? Goodman is rich. Filthy rich. He inherited his wealth from his daddy. I checked prices on Bentley convertibles and they can cost a couple of big ones. The hundred-thousand variety of big ones.

The douchebag plead “not guilty” to a charge of vehicular homicide and currently awaits a criminal trial.
END_OF_DOCUMENT_TOKEN_TO_BE_REPLACED

Moralities: The Ant and the Grasshopper

The ant worked all summer. The grasshopper played. Winter came and the ant ate well and sat by the fire and watched the grasshopper die.

The grasshopper went directly to heaven and the ant went to Hell. Moral of the story? Don't watch FOX News or vote for Newt.

Just go ahead and ignore my snide little partisan joke at the end there. 🙂 What do you think? Am I right? Wrong? For that matter, what is right and wrong? What would you do?
END_OF_DOCUMENT_TOKEN_TO_BE_REPLACED

Hyppo and Critter: Million vs 25k