A wise person once said, “I feel in need of a long, hot shower.” Yep, that’s the most recent comment on this blog as I sit down to work on this post and a fitting way to start. Yesterday’s topic decidedly left me wanting the same.

The key word in the opening statement is “hot.”

Q. What goes in the toaster?

A. Bread, you idiot.

Q. Do you sell any hot water heaters?

A. No, you idiot. You don’t need to heat water that’s already hot.

Ah. So we’ll need a water heater if we want our shower to be nice and toasty.

We’ve lived in the big city for eight months now. During that time the hot water has had a rosy hue. Kind of the like the candy apple red on the car in the movie Corvette Summer starring Mark Hamill. We’ve been showering in rust.

The water heater, circa 1985, was almost 30 years old. My wife finally convinced the property management company to put in a new one. They were sending over their man to install it.

The big day came and I listened out of the corner of my ear, working on my computer, safely ensconced in my office, as my wife met the guy and they set about the task. Everything seemed to be going fine.

I went to the kitchen to get a refill on my coffee. The man saw me. Oh shit.
END_OF_DOCUMENT_TOKEN_TO_BE_REPLACED 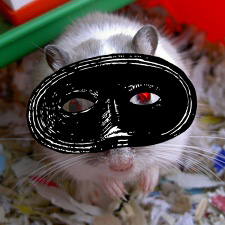 I’m just guessing here, but something tells me that William Shakespeare may have met a gerbil or two in his day.

We’ve all heard of or seen parents who have no clue about their children. “Not my Johnny,” a mother might wail. “He’d never do something like that!”

Oh, if only you knew and accepted the truth, lady. If only you knew. Perhaps you don’t possess the fortitude to face certain truths.

Assuming level-headed parents who are able to see the writing on the wall, they will reluctantly acknowledge whatever their children are rather than the pleasing fiction of what they wish they were.

Sigmund Freud famously believed that parents were the center of a child’s universe. Some contemporary researchers, however, believe that peers have much more influence on development than parents. (Source.) That’s potentially some good news for some parents out there. If your child is an asshole it may be less of a reflection on you as a person and your parenting skills than you might have guessed.

One thing, at least to me, seems certain. As children grow older their secret lives grow as well. They keep some parts of themselves private from their parents. In reality, this is something we all do as a matter of living our daily lives. At different parts of the day I’m husband, father, employee, citizen, volunteer, driver, customer, etc. Each role has different parameters and the range of behavior may vary. In some cases, it may vary by an extreme amount. The people that interact with me will see the range of behavior for the given circumstances. They may never see any of the other sides me in the various roles that I play on the stage of my life.

It is the same with gerbils.

As parents my wife and I are not stupid. We knew full well that we weren’t privy to the many secret lives of our gerbil. But knowing something is out there and is possible is a lot different than getting confirmation of what it is. A gerbil’s life is one of plausible deniability.

For example, you may suspect that what you are being told is a lie. That suspicion is slightly different than confirming beyond the shadow of a doubt that what you have been told is false. Suspicion and knowledge are two different things. Gerbils live mostly in the gray area that lies in between.

The process of learning more and more of the various faces that have been carefully hidden from you can be extremely arduous. Among other things it involves revising your definitions of what is possible. You may have previously thought your gerbil would never do certain things, but when faced with evidence that is indeed the case, you only have two choices: Delusion or acceptance. True acceptance can be quite difficult. I hope this is not something that most parents have to experience. You can trust me when I say this process is quite unpleasant.

The reality is that you may know and understand your gerbil far less than you ever thought. If a gerbil was a circle, the part visible to you might only be a tiny fraction of the total, perhaps only one thin degree. Can you imagine finding out that you know that little when you believed it was actually much more?

In our case that circle of knowledge continues to grow and we are reaching the point that while the love is still there a tipping point is rapidly approaching. For lack of a better term, an intervention is fast approaching. I fear the future in that the three years of a total lack of responsibility may have already irreparably harmed our gerbil. Our kindness and giving in may, in the end, turn out to be counterproductive to his well-being. For myself, I can admit to being surprised.

For us the end game is near. Unfortunately there may not be a lot of humor in it.