What we need: Laws that prohibit or restrict assault weapons, handguns and high-capacity magazines.

Canada, a gun-loving country, has gun control a lot like this. Citizens are allowed to own all the rifles and shotguns that they want. This just in: The universe has not imploded in Canada. You’ll no doubt be amazed to know they have lower rates of gun violence and murders than the United States.

Today I attempt a short bit of logic to rebut the nonsensical sound bites offered ad nauseam by the NRA.

A well regulated Militia, being necessary to the security of a free State, the right of the people to keep and bear Arms, shall not be infringed.
–The version ratified by the U.S. Congress

Yes, there was more than one version. In addition to the one above there was a version ratified by the States and authenticated by Thomas Jefferson, then Secretary of State. Capitalization and a comma differed between the two versions. (Source: Wikipedia.)

I have two points to make. Since I’ve talked about this before, I’ll be brief and do it using less than 600 words.

END_OF_DOCUMENT_TOKEN_TO_BE_REPLACED

Taking a Shot at the Gun Debate 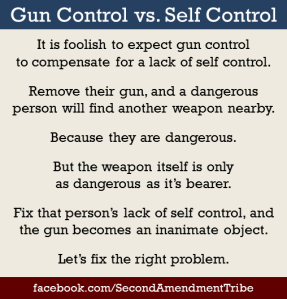 I recently made the point that unbalanced power, control and influence is a bad thing. That kind of inequity leads to extreme positions, injustice and unfairness. This opinion is based on the principle that power corrupts.

The NRA is the most influential lobbying group in the United States. Wikipedia says the NRA has 4.3 million members. But what groups exist to counter the NRA? To offer opposing points of view? To provide a little balance? I found one called the Brady Campaign to Prevent Gun Violence. Wikipedia says they have less than 28,000 members.

It’s my opinion that when it comes to gun control there are many statements thrown about that sound like truisms at face value but are actually logical fallacies. Groups like the NRA use this to create confusion and misunderstanding to their advantage.

In this post I’ll ponder some of these nuggets of debate and offer my take. It’ll be a pistol-whippin’ good time.
END_OF_DOCUMENT_TOKEN_TO_BE_REPLACED

Logic Shot Through The Heart 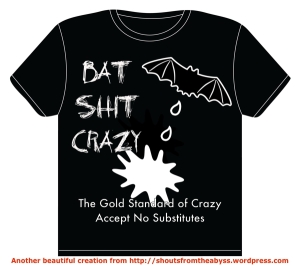 The NRA is the winner of this year’s SFTA Batshit Crazy Award. Congratulations! You earned it.

The existence of the National Rifle Association begs the question, “Can you win an argument with a crazy person?”

The answer, of course, is, “Hell no. BANG. BANG. You’re dead. Now don’t say shit like that ever again.”

I’ve been trying to think of an analogy to start this post. I utterly failed so we’ll go with the ever popular cookie.

“Are you fucking serious? You were totally wrong about that four years ago. Totally. It is scientifically impossible to be any more wrong than you were. I’m still here. I ate the cookie and I didn’t die. You were the worst wrong of all time. You hold the world record for wrongness about that cookie. How do you live with the fact that you were absolutely wrong in every possible way?”

“Easy. I figured out that the cookie had an evil plan. It decided to kill you later. It didn’t kill you the first time because it wanted to lull you into a false sense of security. The next time you eat the cookie you will die. You’ll see. That’s why I was wrong. I failed to truly understand the evil and deviousness of that cookie.”

Fool me once. Shame on you. Fool me twice? You must be the NRA.
END_OF_DOCUMENT_TOKEN_TO_BE_REPLACED

Let us write some Bible

I’m over a year late on my coverage of this story. Sorry. I just heard about it for the first time.

This is a story that originally broke in Jan. 2010. It’s about a defense contractor that makes rifle scopes used by U.S. soldiers in Iraq and Afghanistan with references to Bible verses stamped on the scopes. (Disclosure: Wikipedia reports that the company has since discontinued the practice.)

Chapter 4, verse 6 of the Second Epistle of Paul to the Corinthians reads: “For God, who commanded the light to shine out of darkness, hath shined in our hearts, to give the light of the knowledge of the glory of God in the face of Jesus Christ.”

So take that, scumbags! We fight on behalf of Jesus Christ. We are holy soldiers.

[The] verse is rendered on tiny letters on the the scopes, made by Wixom, Michigan-based Trijicon, as “2COR4:6” referring to chapter 4, verse 6 of the Second Epistle of Paul to the Corinthians. Source.

The defense contractor, Trijicon, “has a $660 million multi-year contract to provide up to 800,000 sights to the Marine Corps, and additional contracts to provide sights to the U.S. Army,” ABC News reported.

According to Wikipedia, Trijicon is one of the “Top 100 Contractors Report on the Federal Procurement Data System lists the top one hundred defense contractors by sales to the United States military.”

Trijicon also likes their religious beliefs. I found this on their official web site this morning:

Morality
We believe that America is great when its people are good. This goodness has been based on biblical standards throughout our history and we will strive to follow those morals.

Seriously. Who dares to claim the lines between church and state and religion and our military are blurred. Ridiculous!

Trijicon is an American company, based in Wixom, Michigan, that manufactures and distributes optical sighting devices for firearms, including pistols, rifles, and shotguns. They specialize in self-luminous optics and night sights, mainly using the slightly radioactive isotope tritium, light-gathering fiber optics, and batteries. Source.

We make shit that kills people. Praise the Lord!

Long story short, I figured that stuff about “light” was way too tame for a company like Trijicon. We’re talking about exploding someone’s fucking skull with a bullet from 600 to 1,000 yards away. (That’s more than one-third of a mile.) I think we can do better. That’s when I had my idea: A Trijicon biblical writing contest!

“Light upon my scope, oh Lord, grant me the strength for my aim to be steady and true, to smite and vaporize the head of my enemy, in your name.”

“Blessed are the children that spake the Lord’s name with itchy trigger finger, that they shall deliver death unto He most high and behold His kingdom and glory.”

How are your writing skills? Can you improve on these and come up with some of your own? It’s not every day you get to update the Bible!

Nutjobs are a concern. Nutjobs who can legally purchase handguns and “assault rifles” like the AK-47 are a greater concern.

Have a nice day.