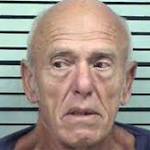 “Life is a bad neighborhood.”
–Tom B. Taker

Oh, out on a lonely stretch of road
Beware o’ that unwritten code
Make an illegal pass again
He’ll leave you a fucking road stain

Life is hard. We all get that. Some of us, though, are a bit more proactive. We take that knowledge then go out there and do what little we can to make it even harder.

There are people who walk among us who do shitty things. Unimaginable assholes. In the old days they’d get away with it. But now, because lots of us cover ourselves with video cameras when we step out of the house, every once in a while one of them gets nabbed with their dirty mitts in the cookie jar.

Meet William Crum, age 68. Angry. White. Elderly. Texan. While out driving a two-lane blacktop with a double-yellow line he was illegally passed by a motorcyclist. We know what happened next because another motorcycle rider who was following behind got the entire thing on video.

As the motorcycle attempted to pass, Crum’s vehicle sharply and “violently” swerved and sideswiped the motorcycle, sending the two people on the bike to the ground. The motorcyclist suffered cuts and road burns. His girlfriend passenger, however, was airlifted to the hospital with more serious injuries. After spending time in intensive care she was moved to a regular room and is now in stable condition.

Confronted at the scene, Crum was recorded on video making this statement: “I don’t care. Double yellow stripes. I got stung by a wasp.”

Crum refused to apologize to the motorcyclist, saying, “To her [he would] … but to him, no, because he was doing something illegal.”

I now break out my Asshole Decoder Ring and offer the following analysis:

Baby You Can Drive My Truck

The batter is warmed up, in the on deck circle. I love spring. He even has his Nike batting glove on.

Everyone has a right to my opinion and I carry a toilet plunger to make sure it’s forced as deep as possible down your throat.

I’m talking about, of course, everyone on the internet. That’s pretty much what it has come down to, right?

Take, for example, a video posted two days ago on YouTube of a road rage incident described as “Redneck Road Rage” and “Instant Karma.” The video quickly went viral. As I write this post it already has over 5 million views. Wow.

According to the description on the video, the woman was forced to disable comments after she was issued “umpteenth” death threats and called “a b!#$h/c$%t/whore/slut” a “billion” times.

END_OF_DOCUMENT_TOKEN_TO_BE_REPLACED 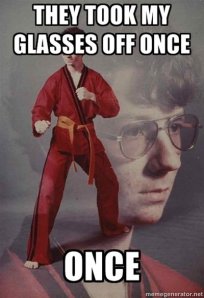 Nerd Rage is not an exact science. There are no right or wrong answers. All approaches have their validity and pros and cons.

The following list is offered as a general guide only. It is not intended to be a road map. Your mileage may vary. The important thing is to be creative and make it your own. Play with it. Get crazy. Do things in a slightly different order.

Much like there are five generally accepted steps in the grieving process, this list attempts to make sense of nerd rage. I think I wrote it after spending eight hours trying to get music from iTunes to sync with my iPad. You know, that thing at which Apple is rumored to excel.

I’ll close with an ancient guru curse: May you always have plenty of technology.

What causes your nerd rage?

How To Be Livid 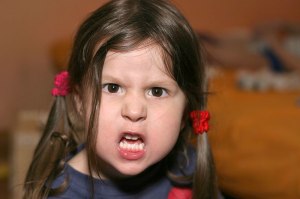 I will feast on your soul.

Prattling on about this nonsense and that is all well and good, but the time has come to put lofty ideas into action. It’s time to be livid.

Pro Tip: You may want to keep some napkins handy just in case veins on your forehead pop.

Sometimes life will lope up on you from behind and give you ample reasons to be angry. Sometimes (although I can’t imagine why) you aren’t even in the mood to be angry yet life will foist itself upon you regardless. It will literally force you to be livid against your will.

True, those are sublime experiences, but they do tend to be rather random and when the chips are down, you really can’t count them.

So, what to do? Take matters into your own hands, of course! With my tried and true techniques, and a bit of practice, so you’ll soon be livid with the best of them, as often as you want and when you need it the most.

Sound too good to be true? It probably is. See? I can feel it working already!
END_OF_DOCUMENT_TOKEN_TO_BE_REPLACED

And now, on a more personal note, I’d like for you to taste my heart.

There are many definitions, perhaps, to be found on the internet for “nerd rage” but this one is mine:

violent, uncontrollable anger, usually in response to electrically-powered modernized technology: in a terrible fit of nerd rage she smashed the DVD player to pieces.

Our DVD player had been giving us fits. It was so sensitive. Checking out TV shows from the library would result in marathon sessions of watching pixelated squares dance across the screen and/or chewing, grinding noises emanating from the DVD unit that delighted and entertained the cat.

Operating on the theory that, perhaps, our 15-year-old player didn’t offer the latest in playback technology, I dragged my ass into the nearest Best Buy to go shopping.
END_OF_DOCUMENT_TOKEN_TO_BE_REPLACED

Timberline and then some

Timberline is a ski resort located on Mt. Hood, Oregon. A timber line is a line of debarkation into an area where growth is no longer possible.

Now watch as I bring those two concepts together in a special Guru of Negativity kind of way. Today I’m going to share a true story from my period of apprenticeship that we will never speak of again.

The local news just reported that Timberline Lodge has received the first snowfall of the year. It’s not likely to stick around, so it’s a skosh early to grab my skis and take to the slopes, but it does remind me of the time…
END_OF_DOCUMENT_TOKEN_TO_BE_REPLACED

This week’s Saturday Reblog touched briefly on the minimum wage issue. In light of current events and the passing of Labor Day (that sounds about right) I wish to expound on this topic a bit more. My goal is to make a couple of points that I think are patently obvious that I haven’t quite seen before, not that I’ve looked very hard. –Ed.

The Federal minimum wage is $7.25 per hour. This minimum rate of pay became effective way back on July 24, 2009, as part of the Fair Labor Standards Act (FLSA).  That was over four years ago.

Like practically all business laws in this country, the FLSA law provides plenty of exceptions and loopholes in favor of business. The standard practice is to make laws that appease the mindless masses by rendering them toothless. If the law was a ravenous tiger it wouldn’t even be able to gum anyone to death.
END_OF_DOCUMENT_TOKEN_TO_BE_REPLACED