On Monday the Supreme Court Of The United Status (SCOTUS) rendered a decision in Burwell v. Hobby Lobby Stores, Inc.

What’s a “Burwell,” you ask? As the Secretary of Health and Human Services at the time the decision was rendered*, Sylvia Burwell automatically became a footnote to history. Based on her position, as far as this case is concerned, she’s a proxy for the United States.

*render:
melt down (fat) – process (the carcass of an animal) in order to extract proteins, fats, and other usable parts.

At issue (per the Hobby Lobby website): The federal government mandating that “family businesses provide four specific potentially life-terminating drugs and devices through their employee health plan in conflict with their deeply held religious convictions.” Widely the issue is described as contraception. So what are these four drugs? “[T]wo kinds of emergency contraceptive or ‘morning after’ pills, and two types of intrauterine devices, or IUDs.”

Which way did SCOTUS break? Let’s put it this way. I went to the official Hobby Lobby online store and clicked a menu option labeled “News Center.” I was whisked away from shopping to HobbyLobbyCase.com, a lavishly and gorgeously designed website which proudly proclaimed, “A VICTORY FOR RELIGIOUS LIBERTY.”

I guess that answers the question, “Will they keep it low key?” Obviously, hell no. Shout it from the mountain top Moses-style. Some can just naturally sense the appropriate amount of decorum. Is gloating one of the seven deadly sins?
END_OF_DOCUMENT_TOKEN_TO_BE_REPLACED

Some of the most successful posts on this humble blog pertained to Crowbar Ranch. That’s the term I came up with in 2010 for Conklin Dairy Farms where an employee was videotaped abusing animals.

It’s time for a very, very disturbing and frightening update. For those of us who were left wondering how industry might respond, now we have our answer.

Industry groups and forces with deep pockets and with purchased politicians in tow have joined forces to push for laws that will criminalize the act of secretly videotaping animal abuse.

Yes, you read that right. Industry could have responded by saying, “We are outraged. These cases are outlier events. We are eager police ourselves and prove that industry can be responsible. This sort of activity will never be tolerated.”

They could have done that. They didn’t. Instead they unleashed their lobbyists and let the money flow to politicians who now support draconian industry-sponsored legislation.

Stop animal abuse or attempt to stop those who attempt to uncover it? That’s a tough choice for some. The farm industry is basically saying, “We want the right and the protection for animal abuse to continue. And we will do whatever it takes to protect this status quo. Even labeling those who seek to expose the truth as criminals and terrorists.”

Is it too much to ask that an industry that profits from animals should be expected to treat the animals responsibly? Industry steps up and emphatically responds, “Yes!!! That is too much to ask.”

It’s not just about the animals, either. Some experts have speculated about the deleterious effects to the food supply and the risk it poses to the health of human beings. As usual we are more than willing to cut off our noses to spite our faces if, while in the process, we can make a few bucks.

My two presidential campaign promises: Places where food is made have to have glass walls, and 7.5 ounce packages can't say "five servings."

Transparency is the best weapon against this sort of thing. Most forms of evil thrive best in the seclusion of privacy. 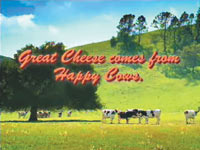 So called “Ag-Gag” laws criminalize attempts to discover animal abuse by means of secret videotape, failure to disclose ties to animal rights groups during the hiring process, and require all video to be turned over to police within 24-48 hours, etc. (The latter eliminates the power of viral videos.) A bill in Arkansas seeks to prevent “harm” to a “livestock or poultry operation.” Animal abuse is acceptable but don’t try to harm a sacred cow like an “operation.” (Rhymes with “corporation.”)

Last year, Missouri, Utah and Iowa passed ag-gag laws. There are now five states with ag-gag laws on the books.

Even so, more states are currently considering getting on board in the ag-gag game: Arkansas, California (the land of “happy” cows), Indiana, Nebraska, Pennsylvania, Tennessee and Vermont (the home of Ben & Jerry’s).

Without the power of video people will still have the right to report what they see. And we all know how that story turns out. They’ll be fired, harassed, maligned and marginalized and caught in a He Said,  She Said situation where nothing of any value will ever happen. Industry thinks of that outcome as the freedom to operate with total impunity.

Behold the power of the agricultural lobbies. They can take fast, swift and decisive action when they are in the mood. Unfortunately they have opted to use this power for ill. It’s enough to make me sick to my stomach.

Taking a Shot at the Gun Debate

I recently made the point that unbalanced power, control and influence is a bad thing. That kind of inequity leads to extreme positions, injustice and unfairness. This opinion is based on the principle that power corrupts.

The NRA is the most influential lobbying group in the United States. Wikipedia says the NRA has 4.3 million members. But what groups exist to counter the NRA? To offer opposing points of view? To provide a little balance? I found one called the Brady Campaign to Prevent Gun Violence. Wikipedia says they have less than 28,000 members.

It’s my opinion that when it comes to gun control there are many statements thrown about that sound like truisms at face value but are actually logical fallacies. Groups like the NRA use this to create confusion and misunderstanding to their advantage.

In this post I’ll ponder some of these nuggets of debate and offer my take. It’ll be a pistol-whippin’ good time.
END_OF_DOCUMENT_TOKEN_TO_BE_REPLACED