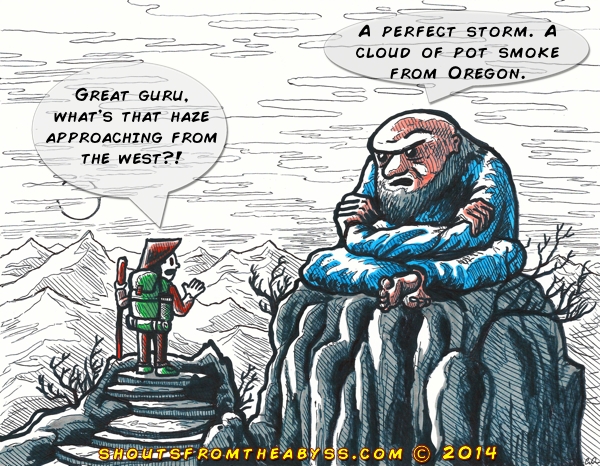 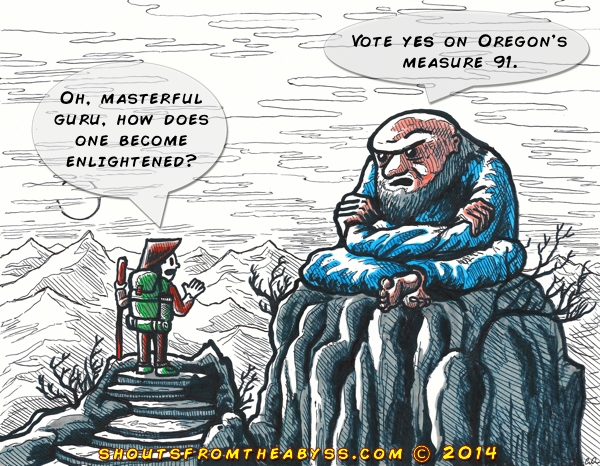 Well, sheeet. I guess you all know what I look like now. Special shouts at Erik Reichenbach for giving guru a total makeover.

All across this beautiful nation of ours people are getting stoned out of their gills. (Which, thanks to fantastic advances in high jinx pharmacological science they literally believe they have. Gills, I mean.) Some get so high, either by themselves or administered by their prostitutes) that they depart for a higher plane of existence.

Me? I’ll imbibe the occasional mint julep (in honor of Dr. Leonard McCoy) but that’s about as far as it goes. I don’t get high. I get even. And man, I am so even right now. But seriously, though, the best I ever accomplish is a temporary hit to my already questionable judgement. And a nap. Alcohol is always followed by a nap.

Beyond that, the only time I have need for drugs is when I’m in pain. P-A-I-N. Like when a tooth goes supernova. It’s the old arrow through the tooth routine. Ha ha.

But unlike every street rat and Silicon Valley exec, my choices are decidedly limited. I have abscess to anything as long as it literally does nothing (except, maybe, the side effects). What a deal!

So I call the dentist. It’s an “emergency,” I say. No problem! “How does Tuesday next week sound?” How does that sound? How about I feast on your soul with my last working tooth?

They always think I’m after the drugs. Yeah, people on the streets are scarfing pills like they’re Fruit Loops but I’m going to call you, my dentist, to get my fix on.

“Just take some over-the-counter stuff,” he says. As if the words uttered by a dentist actually makes them effective and gives them power. Acetaminophen. Ibuprofen. The words just roll off the tongue. Or they ought to for all the good they’ll do. Are you freaking kidding me? They just announced a study this week which revealed acetaminophen is no more effective for lower back pain than placebos. Which is unfortunate because acetaminophen is pretty much the #1 recommended analgesic for lower back pain. Oops. Our bad. (Which, by the way, you can’t spell analgesic without anal. Coincidence? Methinks not. Someone is too damn clever.)

How about you shove that OTC back in your analgesic, k?

I have a question. When you call the dentist why isn’t his response should be limited to one of two possibilities? 1) Come right in and I’ll work on you now and make it stop. 2) Come right in, I’ll take a quick look, and I’ll be happy to prescribe a serious pain reliever until I can see you sometime next week.

Why the hell don’t they do that?

My theory? It’s punishment. It’s the dental equivalent of dad grabbing the belt and taking me out behind the wood shed. Someone has gots to be learned a lesson. Maybe next time you won’t wait so long until you call? How many times do I have to drill this into you? This hurts you a whole lot more than it hurts me.

Today I saw the dentist and he readily agreed my mouth should be toured by the President in a helicopter after being declared eligible for disaster relief. “See? Aren’t you glad I made you wait?” Then I was finally handed a script for Tylenol-Codeine and admonished, “Be careful while taking these. Don’t try to drive or anything. This is powerful stuff.” Yeah, I didn’t just fall off the turnip truck, lady. I saw that episode of M*A*S*H, too.  The one that went on to become a template for modern medical science. “Take these sugar pills and call us in the morning. Be careful! Powerful stuff!”

They say life is pain. But maybe that’s just because everyone except me gets abscess to the good stuff.

Yes, I replaced every instance of “access” with “abscess.” That’s my literary genius at work. I don’t even charge extra. -Ed.

Do you need change? 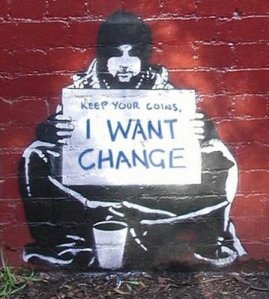 It had been an enjoyable meal. At least until it all went sideways.

The waitress approached our table, looked me directly in the eye and said, “Do you need change?”

Wait. What? You don’t even know me! How dare you?

I had to admit, though. She was right. I did need change. A lot of it. I decided to start with a slice of New York cheesecake (is there any other kind?) drizzled with strawberry syrup.

Luckily 2014 was right around the corner and I’d soon have the opportunity to issue false platitudes and reassuring justifications to myself and pretend that I’d try to improve.

Since she was there, I decided to ask her for her assessment and she gave me the following list.
END_OF_DOCUMENT_TOKEN_TO_BE_REPLACED

I remain committed to producing the best quality graphs based on made-up data to support my inane points regarding the issues I really care to rant about.

What does this mean to you? Not much. Hey, just like the local evening news! I think I’m onto something here.

Our top story tonight. Ominous fluffy clouds, pregnant with expectation (and moisture), have birthed innumerable litters of chubby drops that the WeatherTrac9000 computer calls “rain.” These drops are currently on a collision course with the place most of us live. The WeathTrac9000 calls that place the “ground.” We are currently projecting that these drops of mostly water will make the ground “wet.”

We start our exclusive News42 team coverage with Alex on remote location standing by a street. Alex?

That’s right, Cassandra. Weather is coming to a street near you and it is pissed off. I’ll step aside to see if we can get a shot of this. You can clearly see drops of water hitting this street. And that is creating a dangerous situation that leaves some drivers out in the cold.

Earlier today this was the scene, with street surfaces wet. In one case, we found a car pulled over on the side of the road with its blinkers on. That driver was forced to sit and wait and hope that conditions would improve.

Even worse conditions may already be on the way. For that we go to Marko in the WeatherTrac9000 Weather Center. Marko?

That’s right, Alex. We are currently projecting alternating periods of light and dark at approx. 12 hour intervals until further notice. This means some rain may be less visible at certain times. Viewers are advised to remain on this channel for the latest updates as they become available.

For the intelligence-impaired here’s tonight’s Weather-Pick-Toe-Graph. This patented WeatherTrac9000 system helps those suffering from small brain syndrome to help prepare for the weather. Tonight’s picture: The Gorton’s Fishman in bright yellow slickers including full-frontal hoodie. We’re showing him holding a ship’s steering wheel but you don’t actually have to have one of your own.

For the rest of you I will now show lots of slides and animations and maps and use a lot meteorological words for eight full minutes of our 16-minute broadcast (not counting commercials).

I was just subjected to an ad by these motherfuckers as payment for watching a YouTube video. Gag me with a spoon!

OK, HFCS. You got my attention. You want to play? Let’s play!

First things first. The ads say they are paid for by the “Corn Refiners Association.”

WTF #1 – Corn can be refined? Now that’s something I didn’t now, and didn’t want to know. Ever!

Technically the ad I saw was paid for by The Center for Consumer Freedom. Ah, freedom! Such a noble concept. Who could ever object to something like “freedom,” right?

So who is this Center for Consumer Freedom, anyway? According to their official web site:

The Center for Consumer Freedom is a nonprofit coalition of restaurants, food companies, and consumers working together to promote personal responsibility and protect consumer choices.

Am I reading that correctly? It seems they are saying that those who use their products are irresponsible but that we should have the freedom to be irresponsible like that if we want.

Not quite the most compelling inducement of all time. Heh!

The commercial I saw had an ear of corn in a police line up with a sugar cube and a bottle of honey. It made the following points:

Let’s assume the claims in this ad are true. What has been proved? Is HFCS healthy? No. They make no such claim. If anything, the ad can be interpreted as saying, “Hey, don’t pick on us. We’re just as bad as these other guys.”

But that’s not where my beef lies with these folks. (Did I mention they hate PETA, too?)

Try This at Home Science Experiment

It’s time for a science experiment, boys and girls. One you can even do yourselves!

For this experiment you will need:

Step 3 – Pick up a can of Campbell’s Tomato Soup.

Step 4- Read the label and find the ingredients.

Well, what did you come up with?

If you found “high-fructose corn syrup” you are a critical thinker and first class scientist! Well done! (For my photograph above I used Brand X and HFCS was the second ingredient. It went: tomato, HFCS, then water. Mmm mmm good food, eh?)

According to the label on the can, that’s 24 grams of sugar carbohydrates per “serving.” And we all know what a “serving” is, right? About 1/4 of what a typical American will eat. 🙂

It’s not just tomato soup, either. HFCS can be found in a dizzying array of surprising products. Why is that, you think? Americans have quite the sweet tooth. Even our non-dessert foods need to be sugary.

Now the people who brought us plan to rename their product. Instead of “high fructose corn syrup” it will be “corn sugar.” Their goal? Obfuscation! It seems HFCS has a negative connotation in the minds of many consumers these days, so the solution is obvious. Rename it! That should be them some time.

The Corn Refiners Association has a high opinion of consumers. “Clearly the name is confusing consumers,” said the president of the group. (Source.)

I don’t think consumers are confused at all.

A high fructose corn syrup by any other name would smell as sweet.