We consider ourselves fairly typical Americans. It was a few nights before the Fourth of July, decidedly my least favorite night of the year. We were in our living room, sitting on our asses and watching TV. Like I said, typical.

Suddenly there was a boom. I looked out the front window and billowing smoke rose from our front yard garden. It had begun.

“Those fireworks are close,” I said. “Damn close.” The shit was literally raining down right on top of us.

On July 4th itself I went outside to see what the hell was going on. I saw one of those colorful bursts like you’d see in any major fireworks display except it was directly over my house. It went off about 20-30 feet over our roof. Two things were immediately obvious: Why don’t they do this shit above their own houses? They’re too good for that! And, wow, they are really good shots. We were being targeted.
END_OF_DOCUMENT_TOKEN_TO_BE_REPLACED 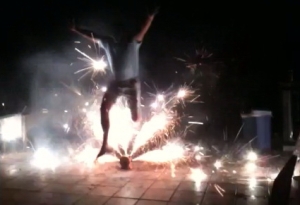 In general, the lower the IQ the greater the thrill from fireworks and twinkly noisy thingies.

Word from the western front arrived early. It was going to be a “heat advisory” kind of a day. We hunkered in our bunkers and prepared for the worst. I put on a pair of clean tighty whities. Because:

To brine thine own self be true.

I was already looking forward to the salt water sores in my private areas. You know what they say. “Fight ’em over there or in your underwear.” Like always I choose the latter.

Sunday night the neighbor set up a table saw in his front yard. He ran that sucker until 11:36 pm. On a work night. I kid you not. I believe this is the exact storyline of the movie Saw.

What every happened to politeness? Basic manners? Please and thank you? All as dead as my peace of mind and peace and quiet.

Two nights of noise in a row. The urge to fling poo was becoming unbearable. Somehow, though, I was able to hold on.

But, little did I know it at the time, those two nights were merely flanking feints. The best was still yet to come. 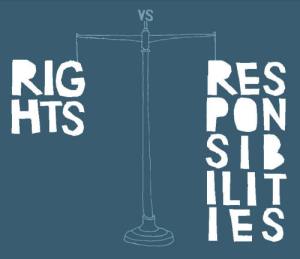 I thought the headline was so hilarious until I found out “constitutional” is decidedly not a word that means “enema.” Dammit!

Still, ever since colonic times we Americans have clung to fiercely held beliefs that we know to be self-evident. (Whew, that was a close one. For a moment there I almost didn’t bring this article down to the proper level.)

I may still be gin treatment but allow me to raise up my Tom Colonic and propose a wee toast:

As we all know, those rights our founders held so dear were elegantly immortalized in the U.S. Constitution. Except for the stuff they got wrong, of course, like those not “free” being counted as only three-fifths of a person and women not having the right to vote.

I don’t want to hit you with an elementary civics lesson, but we all know the primary function of the Supreme Court Of The United States (SCOTUS) is to chisel away at the rights enumerated in that great document.

In other words, it’s finally time for me to weigh in on NSA monitoring, PRISM and more.
END_OF_DOCUMENT_TOKEN_TO_BE_REPLACED

May the Fourth be with you 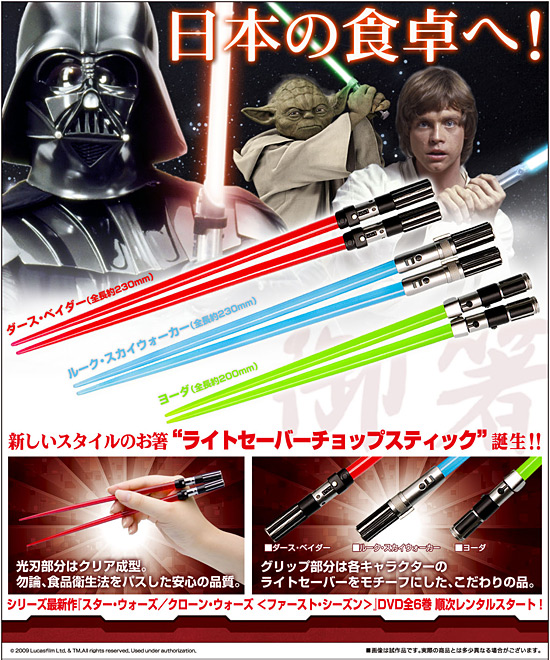 Lightsaber chopsticks will tame that tough piece of meat!

Tonight at 6pm Pacific Time there will be an announcement of intergalactic proportions. It has been a tightly guarded secret and there’s even a web site with a countdown clock to the event:

Why wait? I don’t want to spoil all the fun but I can explain what’s all about right now. It’s just another veritable benefit of being a reader of this blog.

A few months ago George Lucas clenched his butt cheeks and an idea was born. “What if,” he said, “there was a way for those idiots [fans] to buy even more copies of the movies they’ve already owned many times over??? Hell, I’d make a lot more money.”

The announcement tonight will be:

Wow. Really? This is almost as good as the time LeBron James thought it would be a good idea to make a prime-time TV show based on the premise: Should I shit on my loyal fans? (Spoiler alert: He did.) I’ll never forget the announcer who sounded just like Russ Hodges (of “the Giants win the pennant” fame) on that live broadcast: He went for the money! He went for the money!

So George Lucas has decided to suckle on the teat of consumption and this is supposed to be big “news.”

I had high hopes for a pay-per-view event where we see him thrown into a trash compactor but, alas, it is not mean to be.

Remember, you heard it here first!

UPDATE: Now with more video goodness. The tale of George Lucas in college…
Link to video