We went to the trendy new fancy grocery store that opened in our neighborhood this week. We had received a coupon in the mail.

Buy one 12-ounce bag of our “Fedora Blend” and get one free.

Oh, what the hell. We stopped by on opening night.

Recap: We all know what a 12-ounce bag means, right? Deception. Price games. Trying to fuck the consumer. Price concealment. Gee, how do I opt in? I’m a buyer and I don’t want to beware!

So how much was the 12-ounce bag of coffee normally priced? $14 a bag.

A Snot Across The Bow

I’ve always had the ability to sniff out Danger. Let me tell you, it does not smell good. Why do things always have to end up like this?

My mission today is to discuss Weiner and address the elephant man in the room.

I’m going to be straight with you. I’m a dude, albeit a feminized one. So I asked myself, what’s the hubbub about this man all about? Something isn’t kosher!

When I look at the face of Anthony Weiner blood rushes away from my naughty bits and leaves me with a bit of a headache. His face actually causes shrinkage.

Am I missing something? Not to put too fine of a point on it, but the Weiner is completely unattractive. I ask myself, if I woke up in the morning and found him laying on my body, what would I do? I’m forced to admit I would chew off my own arm just to get away. Trust me on this, not many humans meet that standard.

Or is it merely the money? Power? Celebrity? Is it all about the unquenchable lust for 15 minutes of shame? Is this what we have come to? That life is the ultimate substitute for reality TV like the game of Survivor?

I don’t get it. Luckily I keep an airsickness bag handy for times like these.

I wonder about things. Weird things. For example:

Who was it that invented coffee? I’m not really as interested in the “who” as the “how.” Who was it who looked at a coffee bean and said, “You know what? I bet if we pick that thing, roast it, then grind it into dust, then run hot water over it, the water will be good to drink.”

Wow. Quite the imagination there. But it worked out okay.

END_OF_DOCUMENT_TOKEN_TO_BE_REPLACED

Reviving those elephants (via Shouts from the Abyss) 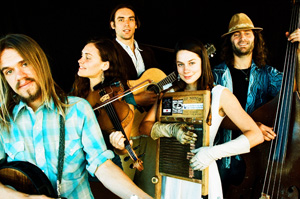 There has been big, big news in the world of Elephant Revival since the last time I wrote about them.

This is an exciting time to be a E.R. fan! Here’s a quick recap of what’s new:

A new CD, Break in the Clouds, has been released since the last time I wrote about them. It is as completely awesome as their debut. You can get it (or both as a combo pack) at the online store Artifact Concepts. You can also read an online review of the new CD at Boulder Weekly.

Elephant Revival music can now be found on Pandora! We can finally make our very own Elephant Revival “stations.” (Works nicely with the Roku to fill up the house with their sound.) So far, I’ve only heard songs from the new album. I don’t think the first CD made it on Pandora. It’s also fun hearing other music that the “Music Genome Project” thinks is similar.

Elephant Revival has pledged to plant a tree for every concert ticket sold via InTicketing. So that’s pretty cool. I  bet that planting a tree never sounded so good.

From their official web site:

“Elephant Revival and In Ticketing have partnered with Trees for the Future, an organization dedicated to regenerating the earth by planting trees. This organization has been helping communities around the world plant trees through seed distribution and agroforestry training. Planting trees protects the environment and helps to preserve traditional livelihoods and cultures for generations. Elephant Revival will sponsor the planting of one tree for every ticket sold to their shows through their fan ticketing system powered by In Ticketing.”

You can listen to their music on their official web site and Pandora or buy their CDs. There is plenty of Elephant Revival to go around. I’ll be watching their tour schedule and hope to catch them live again soon. It is quite the experience.

I recently had the good fortune to get a late invite to a live concert. A couple hours before and I had no clue I was even going out. Then the wife called and said a musical group known as “Elephant Revival” was going to be playing at a local small venue. I’d never heard of them. I found their web page and it said they are in th … Read More

via Shouts from the Abyss

I recently had the good fortune to get a late invite to a live concert. A couple hours before and I had no clue I was even going out. Then the wife called and said a musical group known as “Elephant Revival” was going to be playing at a local small venue. I’d never heard of them. I found their web page and it said they are in the “transcendental folk”  genre.

As a death metal guy, this is a little outside my norm, but I do happen to appreciate and enjoy all sorts of music, so bear with me on this.

Being a fuddy-duddy I decidedly did not want to go. But I love the Mrs. so I do what I must.

We found ourselves in a small country inn. It was a beautiful locale situated right on the banks of a river. There were about 24 folding chairs on the floor about 15 feet from where the band would be playing. We grabbed a couple and began a long wait. Meanwhile the place was buzzing with activity as people grabbed drinks and food. The people were quite an eclectic group. But mostly there was a beatnik or “hippie” feel that permeated the room. I feel a little out of place.

Finally it was time, more than half an hour from when we had been told the performance would start. A band member materialized right out of the crowd, and then another. Soon five people had drifted from the crowd and onto the stage. They had been mingling the whole time. It definitely felt like the kind of scene where a lot of the people there knew each other.

From the band’s web site:

All I can say is, “wow.” Seeing them perform live is one of the highlights of my life.

I immediately sensed that Bonnie, who sang the set’s opening song, was the superstar of the group. Her voice is incredible and she is absolutely mesmerizing. It is literally impossible to tear your eyes away from her. She was wearing a washboard that hung down from her neck and with hypnotic movements of her arms and hands coaxed the most amazing sounds from that musical instrument.

Each of the other four members were equally compelling and it was fun watching as they each took their turn being the featured performer on various songs. All of them can beautifully sing!

Their live performance was incredible. Feeling that music pound into your body was quite the experience. I’m assuming they performed all original material, as I had never heard a single song before, but they were the kinds of song that you instantly fall in love with and can easily remember later. We also picked up their CD (which I highly recommend) and know it by heart now.

Thanks to the YouTube you can see them in action. The videos are awesome but don’t even remotely do justice to what it is like to experience them live. Also check out their web site where you can listen to some of their songs for free. If you like what you hear go to their web site and BUY THE CD!

She plays the washboard in this one!