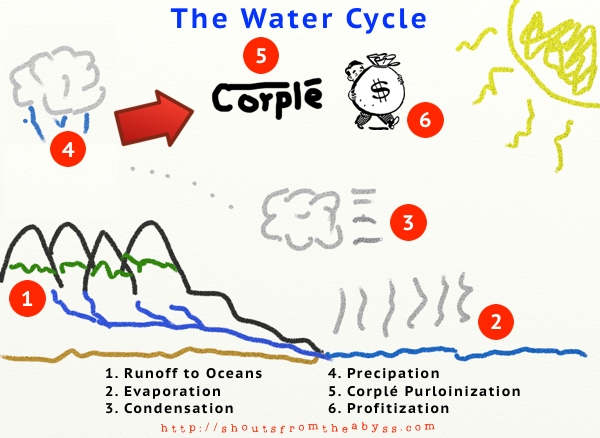 Flow: The Film – The 21st Century – The World Water Crisis

Nestlé has some 8,000 brands, with a wide range of products across a number of markets, including coffee, bottled water, milkshakes and other beverages, breakfast cereals, infant foods, performance and healthcare nutrition, seasonings, soups and sauces, frozen and refrigerated foods, and pet food.

And, finally, a quotation from Peter Brabeck, the Chairman of Nestle Group:

Keepin’ It Reality Yo

I wanna know what you’re thinking.

As a person that constitutes a form of life (or so I assume) there are two realities that I’m reasonably sure exist:

Note: If you get lumped in with the latter group please don’t take it personally. I don’t make the rules.

Even with the stark duality of this view, however, I imagine certain explorations into that other realm where y’all live are still possible.

For example, using inference, deduction and other external stimuli, I can attempt to discern what’s going on in that gray matter you recklessly call a brain. Clues might include things like your primitive vocalizations, ritualistic dance and other movements, and how you are adorned.

That plumage on your head in the form of a fedora speaks volumes. I interpret that as a rather pronounced attempt to establish position within your group. Am I right? Judging actual intent of other life forms can be tricky. It’s always murky guesswork. But I’m pretty sure I nailed it.

I mentioned to my wife the other day that I would deliberately do the opposite of what I really wanted if I perceived that it might be perceived by other people as an attempt to be cool. Think about it. That’s a very deep thought. I’d literally do the exact opposite of what I want, which, by definition, is that which I hate.

What do you want out of life???

I don’t know if I’ll try to answer that question. But I do know this: Watch both Zeitgeist movies, a few choice TED videos, and finish it off with the Story of Stuff and you might just say, “Brother, it sure as hell ain’t this!” And then depression sets in…

In my study of gerbils I have pondered mysteries both great and deep.

“Gerbil” is the term I have coined for younglings that fail to empty nest on schedule. And then, later, when they belatedly emerge from the nest sans high school diploma and any discernable life plan, they do things like go on food stamps, obtain medical marijuana cards (sore back), drink lots of alcohol, sleep until 5pm, stay up until 5am, take pictures of themselves smoking and post them on Facebook, and avoid jobs, school and self-improvement at all costs.

That’s the modern genus of gerbil that I am familiar with.

A Rush song famously said, “If you choose not to decide, you still have made a choice.” Indeed. The modern gerbil lifestyle is a choice!

I took a gerbil aside one day and offered words that I thought, in my hubris, might somehow be wise.

Trust me on this. It ain’t easy coming back from a gerbil bite.