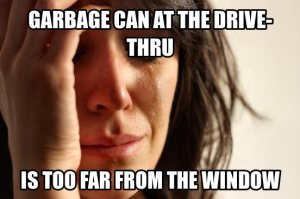 I know, I know! I deserve what I get when I leave the house. Stepping out into the world is exactly like asking for it.

I can’t help it. Stuff happens. I guess it’s all my fault for observing it. If I was oblivious then maybe it wouldn’t bother me.

But what has been seen cannot be unseen. Leaving the house is where the empirical process of data collection begins.

Sometimes, rarely, it works in my favor. Like two weeks ago when we went to the movies. I had to pee so I walked into the auditorium-sized men’s room. Along one wall was a line of 20 urinals. I picked my spot and made a beeline. Along the way I spotted the guy. You know, the one asshole who exists in every social situation. He was standing at a urinal, doing his business with one hand, and talking away on the iPhone in the other. Millennials call that multitasking. I call it being a dill hole.

That’s when The Miracle happened in the blink of an eye.

The iPhone got dropped. And there it went! Zoom zoom! Clackity clack all the way across that pee-covered bathroom floor. The guy stood there, still holding his other device, and lamely watched it go.

It just goes to show that – sometimes – good things can happen. It was pure serendipity and, for one brief moment in time, I forgot all about pain. I was in the moment.

Last night I left the house again but the empirical results were decidedly not as fun. Not by a long shot.
END_OF_DOCUMENT_TOKEN_TO_BE_REPLACED

2010 in review courtesy of the WordPress fairy

My inbox was visited this morning by the WordPress fairy who brought the following bits of good news. As far as I know, I’ve never once in my entire life been rated as “wow,” so that feels pretty good. I can’t help but wonder if everyone got that same rating, though. If so, then this merely represents yet another “participant” ribbon to add to my already impressive collection. –Tom

The stats helper monkeys at WordPress.com mulled over how this blog did in 2010, and here’s a high level summary of its overall blog health:

About 3 million people visit the Taj Mahal every year. This blog was viewed about 29,000 times in 2010. If it were the Taj Mahal, it would take about 4 days for that many people to see it.

The busiest day of the year was September 9th with 4,115 views. The most popular post that day was The Tuesday employee whiteboard.

Where did they come from?

The top referring sites in 2010 were reddit.com, WordPress Dashboard, wordpress.com, google.com, and melcarroll.blogspot.com.

These are the posts and pages that got the most views in 2010.

The Tuesday employee whiteboard September 2010
11 comments and 1 Like on WordPress.com