Justice is eyes gouged out

They say that justice is blind. As far as I can tell it has had its eyes gouged out.

A man with a .38 revolver and 10 rounds of ammunition entered a building. He went to the office of his first victim and shot him in the shoulder and chest, and twice in the head. He reloaded his gun while walking to another office and found his second victim who was shot five times with “the final two shots fired with the gun’s barrel touching” the victim’s skull.

END_OF_DOCUMENT_TOKEN_TO_BE_REPLACED

Don’t Fire Until You See The Frights Of Their Eyes 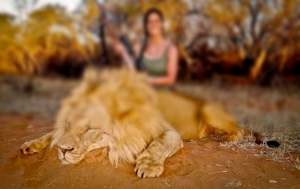 A canned hunt is a trophy hunt in which an animal is kept in a confined area, such as in a fenced-in area, increasing the likelihood of the hunter obtaining a kill. According to one dictionary, a canned hunt is a “hunt for animals that have been raised on game ranches until they are mature enough to be killed for trophy collections.”

If, like me, you ask, “What the fuck is a trophy hunt?” here’s a little help:

Trophy hunting is the selective hunting of wild game animals. Although parts of the slain animal may be kept as a hunting trophy or memorial (usually the skin, antlers and/or head), the carcass itself is sometimes used as food.

Yup. There’s stuff going on in the world that I can’t possibly imagine.

END_OF_DOCUMENT_TOKEN_TO_BE_REPLACED

Cause of the Day #vote 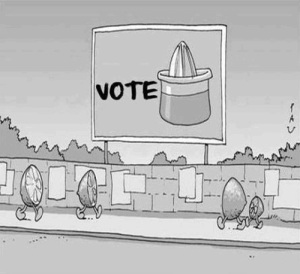 At last, at last! It’s voting day at last! You see, I have a dream. It involves not having my intelligence insulted every single time I turn on the damn TV. I mean, more than usual.

For the United States it is voting day at last.

As early as tomorrow freedom will ring across the land as all the political ads will finally stop running. Yes, for once in my life, I’ll be happy to hear about side effects (up to and including death), how much money I won’t have in my retirement and garments specially designed for Americans and made in China so they can inhale whole containers of Ben & Jerry’s ice cream (where a pint is still 16 ounces) and finger the remote control – all at the same time!

This day brings a lot of craziness.

I’m not going to miss the ads. Let’s take a look at Measure WTF. Ostensibly this measure was brought to the ballot via the citizen initiative process. What does that mean? Most likely that paid canvassers collected the signatures. What’s that? I love the smell of democracy in the morning.

END_OF_DOCUMENT_TOKEN_TO_BE_REPLACED

We Are The Hurled 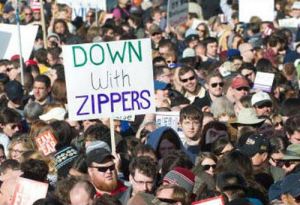 The Law of Biology states:

An organism will do anything it can.

The hypothetical and highly imaginary Law of Ethics states:

Just because you can do a thing doesn’t mean you should.

BZZT! Shock administered to test subject. The word “should” is disallowed. You lose a turn. Go back to START.

Okay. How far back should I go?

Hmm. No need to be excessive. How about the day your slimy species grew legs, became amphibious and hauled itself up out of the primordial ooze and lay panting on the beach?

So yeah, the other day I became embroiled in a discussion on Twitter about free speech. It all started when a person I follow stated they were under attack by some haters. Not only that, but she had just written a piece about how the haters were attacking her supporters, too. Hate by proxy, I guess. Adding my two cents, I responded with this pearl of wisdom:

“You have the right to your voice. Online harassers shouldn’t be allowed to operate with impunity.”

Naturally, as if to prove her point, I picked up some criticism of my own. I then got involved in a surprisingly civil discussion about the perils of too much free speech and what, if anything, constitutes “hate speech.” I began by asking my new-found critic a simple question: Where do YOU draw the line on anonymous online free speech?

His reply? “I don’t. Sticks and stones…”

No limits on free speech? None??? Such is the world of absolutes that some find friendly. This got me to thinking. Twitter, alas, was too limiting of a medium to try to explore some complicated concepts, so this post was born.

What would a world with no limits on free speech look like? Warning: This isn’t going to be pretty.
END_OF_DOCUMENT_TOKEN_TO_BE_REPLACED 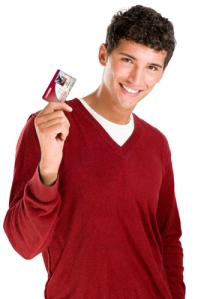 Yo, bouncer. Check this out. Insta playa status! I go to the front of the line.

So you want to be in the mail order business. Whether traditional “brick and mortar” or hanging out your shingle online, you have decided to ask the same question: How easy is it to rip me off?

Mail order is a retail system where fulfillment takes place at a remote location outside of your field of view and control. Think of it as the fog of war. By definition you are operating with less than full information. By design. Remember, this was your choice.

You might as well go in a dark alley and roll some dice. You might get better odds.

Let’s review. What just happened? The customer isn’t out one single penny and the customer has your stuff. Bazinga! And there’s no magical fairy in the universe that’ll ever do one thing about it. Welcome to your new reality.

Those of you who watch Orange Is The New Black may recognize this tactic as employed by the criminal mastermind Lorna Morello during her pre-prison flashbacks. People really get caught for this? No. Remember, OITNB is fiction.

The bottom line is that shipping product mail order to a customer is a supreme act of faith. You’re basically hoping it’ll all work out. And when it doesn’t, there’s isn’t too much you can do about it.

The point is that when this happens the boss is furious and that, of course, is hilarious.

In general, the lower the IQ the greater the thrill from fireworks and twinkly noisy thingies.

Word from the western front arrived early. It was going to be a “heat advisory” kind of a day. We hunkered in our bunkers and prepared for the worst. I put on a pair of clean tighty whities. Because:

To brine thine own self be true.

I was already looking forward to the salt water sores in my private areas. You know what they say. “Fight ’em over there or in your underwear.” Like always I choose the latter.

Sunday night the neighbor set up a table saw in his front yard. He ran that sucker until 11:36 pm. On a work night. I kid you not. I believe this is the exact storyline of the movie Saw.

What every happened to politeness? Basic manners? Please and thank you? All as dead as my peace of mind and peace and quiet.

Two nights of noise in a row. The urge to fling poo was becoming unbearable. Somehow, though, I was able to hold on.

But, little did I know it at the time, those two nights were merely flanking feints. The best was still yet to come. 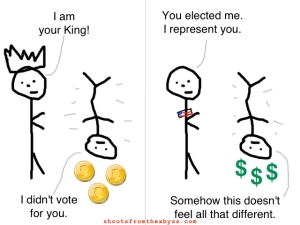 Advertising. Marketing. Sales. These are a few of the things I hate.

Life is meant to be more than simply persuading each other into spending money and consuming goods and services.

The fact that “sales” is the artifice of lies, pressure and Jedi mind tricks to compel people to do things they don’t really want doesn’t help its case.

Advertising can, theoretically, be something good. If you are in the market for a thing and there’s information about that thing at a certain price, that can actually be helpful. Unfortunately, most advertising has devolved into petulant attempts at distraction and attacks on the subconscious. Not just merely advertising, they are better classified as “persuasion attempts.” Some estimates claim the average American is subjected to 15,000 persuasion attempts per day. That’s hinky.

It seems obvious the game has shifted from being informative (advertising) to persuasion warfare (psychology). And it doesn’t have to adhere to the rules of the Geneva Convention or even be honest. Not content to simply remain available in case you might need something, the free market win-based transaction paradigm is now hunting you down to make the kill. The consumer is prey.

What happens when tax dollars are used on advertising? Bad shit.
END_OF_DOCUMENT_TOKEN_TO_BE_REPLACED