It’s hard to believe I worked on this graphic all by myself.

Tim Cook struts out on stage. Music plays. He holds up a device which has 99.9% of the same DNA as a device you already own.

You update that device to the las test and greatest operating system which is essentially the same except it provides more ways for money to flee your wallet and join up with the mothership wad of cash at Apple.

That update makes your device no longer worky.

What does Apple call a person who updates their software on the same day a new version is released? An unpaid beta tester.

Now I ride in like the Lone Ranger 2.0 to save the day. Here’s how to survive an iOS update.

First, take a deep breath. The principle of patience must come into play. Life is short but if you update too quickly it’ll be even shorter.

So you wait. At least one day.

For the one reader who has stuck with me until now, what then?

Go to Twitter and figure out the hashtag for the update. For example, this week it was #IOS81. Click on that hashtag. Read up.

What’s the general consensus? What’s the mood? If you see a lot of statements like, “Thanks a lot, Apple, now my iPad is a brick,” waiting might feel just a little easier.

Repeated this procedure when they release the incremental in the next two hours. Did they just throw fuel on the fire?

Avoid zero day released and the first incremental or two. By the point three it just might be time to start taking it seriously. Are batteries lasting longer again? Does wifi actually work?

During the wait time you’ll feel very along. You’ll feel abandoned. There will be no official word from Apple. They won’t be on the forums. They won’t send you an email. They won’t reach out with a tweet. So you’ll sit and wait. I recommend during this period of time that you invest in a bottle of Templeton Prohibition Era Recipe Rye.

After several months of waiting it’ll be congratulations. Your long term strategy has paid off. You’ll be the proud owner of a working device. Just in time to watch the next Tim Cook floor show, too.

A Bite of Guru: Ham and Cheese Sandwich 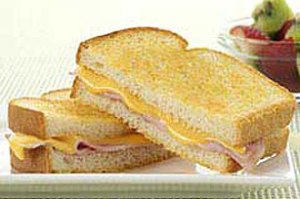 What the hell is this?!

Attention food manufacturers: I could be representing your product online. Hire me and experience a whole new world of exposure. What would it be like? Here’s a little taste. –Ed.

“What is that?” some moron asked me one day.

I chewed and gulped hard. “It’s a ham and cheese sandwich,” I replied even though my mouth was still full.

“And what the hell is that?” they continued with their clever line of questioning.

“I’ll be happy to explain it for you.”

First find yourself some wheat. Harvest the caryopsis (a combination of endosperm, germ, and bran) and mill it to a fine powder. Add some water and a handful of single-cell microorganisms (species Saccharomyces cerevisiae), stir, let rest and insert into a high-temperature chamber for awhile.

Meanwhile kill a pig. Process the meat via curing, smoking or salting. Slice the meat thin.

Find a cow (preferably a female). Gather the white liquid produced by the mammary glands. Allow the liquid to curdle, then beginning mill when it becomes curds. Do this for a long while until the sharp edges of the curd pieces are removed. Allow to ripen. Finally, process the whole thing with additional cow white liquid, salt, preservatives and food coloring. Shape (wheel or loaf) and allow to harden. Be sure approx. 10% or less of the final product is mold. Slice into thin pieces.

Using the same white liquid, agitate forcefully until the fat is separated from the rest. To the fat add salt, flavorings and preservatives. Spread this substance on half of the baked wheat product made earlier.

Finally, take an emulsion of oil and combine in a blender with the golden-yellow part of the chicken reproduction process and vinegar or lemon juice (your choice). Spread this on the remaining wheat product.

Stick the processes thin meat and thin pieces of white liquid mold between the wheat product pieces. This entire assembly is known as a “sandwich.”

Optional: Fry the whole thing in a skillet, if you wish. It can be served hot or cold.

This might be first in a series of post we’re calling Ten Years Of Marriage. We’ll see how it goes. –Ed.

Al Dente? Who the hell is he? LOL! No, he’s not a person. He’s a thing. Al dente is actually Italian. It means “this bites.” (Disclaimer: This is a guess. I was too lazy to google. –Ed.)

In honor of my wife asking me to think about what I’ve learned during ten years of marriage (our anniversary is next week) I thought really hard and remembered spaghetti.

My wife, although technically not a “chef,” is nonetheless extremely accomplished and talented in the kitchen. She really knows how to cook. Naturally this is both good and bad. Good in the sense that there are a lot of good eats. Bad in the sense that every meal dirties every pot, pan and kitchen implement in the house.

It’s bad in one other small way. It’s such a slight of a trifle that it’s almost not worth mentioning. Almost.

Every single thing I do is wrong. In the kitchen, I mean.

So there I was this one time making spaghetti. That means I had dumped some packaged noodles in a pot of boiling water. To me that’s “cooking.”

As was often my wont, when the timer went off I picked up the pot and dumped the noodles in a colander in the sink.

My wife saw. “What the hell are you doing?” she yelled.

Hyppo and Critter: Catering to the Choir

The Tom B. Taker Cook Book

Well played, voice in my head. Well played. I can’t wait to get my hands on you. You are gonna die.

I’ve posted recipes in the past. I won’t bother linking them, though. I don’t remember what they were and besides, copy and paste is too much damn work. And I’m tired from writing an entire cook book.

Sometimes my wife cooks. Sometimes I cook. And that gave me an idea. I should lock my knowledge away in a tome.

Cooking with Tom B.

The little hot dog that could.

I’ve been cooking all of my life. Mostly with food. And sometimes I even eat what I cook.

And guess what? I’m still here.

About six years ago, though, something happened that brought a dramatic change to my cooking life.

I married a woman who is “gourmet” in the kitchen. All of the sudden it was goat cheese (yuck), blue cheese crumbles (yum), and things like caprese salad and amuse-bouche.

I realized that my way of cooking was slowly being lost and that if I didn’t do something, it would completely disappear and then the world would forever be without that knowledge.

Thus the idea for my newest project: Cooking with Tom B.

I know what you are saying. What are this guy’s qualifications? Let me put that to rest right up front. I was taught by my father, inventor of things like his “world famous spaghetti sauce” and “hot dog juice soup.” I have taken his trainings and built upon them adding my own twists.

The focus of my show will be cooks who don’t have time, want to cut corners, and favor techniques that result in the least amount of dishes that will need to be washed.

Here’s some of what will be featured during season one of my new show:

More episodes are possible depending on how many more things I might do wrong in the kitchen. Stay tuned and Bone Appetite.

Sorry, Jamie Oliver – America will send your show back

Jamie Oliver is cute. He has charisma. Apparently he knows something about food and cooking. I mean, he’s on the Food Network, right? Of course, that doesn’t always mean that much. For example, Rachael Ray is not a chef. Oliver, who started as a pastry chef, at least has earned the title.

Oliver also has some good intentions mixed, no doubt, with a fair amount of desire for a hit TV show and the scrilla that would result.

Reading his Wikipedia page this morning I also see that he’s been on about a zillion TV shows. Wow.

His latest project is called “Jamie Oliver’s Food Revolution” and premiers on ABC on March 26th. The premise of the show is essentially improving the eating habits of Americans.

The premier episode features Oliver visiting the city of Huntington, W. Va., which a CDC report called the unhealthiest city in America. (Report: 2008 Centers of Disease Control and Prevention report.) Apparently over 50 percent of the population is reported as “obese.”

In a television commercial, an outraged Oliver toys with a plate of fried potatoes while he indignantly exclaims, “French fries are not a vegetable!”

Why The Show Will Fail

My prediction is that the show won’t play well here in the U.S. First, Oliver is a Brit. Don’t get me wrong, there is absolutely nothing wrong with that. But Americans don’t take kindly to being told what to do, and certainly not by someone with an accent. Secondly, Americans don’t like being told what to do. By anyone. And lastly, Americans are doubly hooked and are not about to change. They are hooked on their eating habits and they are hooked on their sedentary lifestyle.

By the way, some are saying Oliver’s “revolution” may not be so revolutionary. According to NBCPhiladelphia.com, “there are already hints behind the scenes that Oliver’s efforts may not have been as well-received as you may be led to believe.”

I seriously doubt that a TV show, even one with a cute and lively limey at the helm, will accomplish serious change, and, I think it’s likely it won’t even bring in the ratings to be considered a “hit.” (You heard it here first.)

In the off chance that I’m wrong, I’ll add this: If the show does do some good, I’d attribute that to the growing awareness about food and health in our country that was already well underway long before Oliver arrived to save the day. But that certainly doesn’t mean he can’t come loping in like Rambo without a jock strap, take credit for it and cash in all at the same time. 🙂