This just in: The Earth’s tilt (or spin axis, if you will) is still 23.5 degrees. Ooooh, yikes. That’s a mite chilly, mate. 23 freaking degrees?!? Are we talking fahrenheit or celsius? Either way, that’s colder than [insert your own obscene colloquialism here] in a pickle jar!

Weather segments on the local news have always been a bit extreme, full of histrionics and hyperbole. ZOMG, tomorrow there’s going to be wet, sun, fog, humidity, wind, mist, hail, and, worst of all, clouds. No shit? Really? Ya think?

Tell you what? If you can successfully predict before it happens when lizards will fall out of the sky, wake me up. Okay? Until then? Shut your fucking omen hole.
END_OF_DOCUMENT_TOKEN_TO_BE_REPLACED

I enjoy playing a good game. Especially stratergy games. Throw in the concept of work and you’ve got yourself a surefire hit.

You see a coworker take a piece of office candy. You grab an Uzi and gun them down. Sorry, that’s a note to file. That sort of infraction goes on your permanent record. Go back three spaces.
—Candy Banned playing card

Last week I came in to work one morning and cow orker was abuzz with excitement. She even said “good morning” in violation of office protocol forcing me to grunt in response on the way to my desk.

What could possibly have her so worked up I asked myself out of boredom in sheer desperation. I could care less and forgot the whole thing. But then, unbidden, she explained it to me anyway.

“We got another one!” she exuberated breathlessly. “Another one!”
END_OF_DOCUMENT_TOKEN_TO_BE_REPLACED 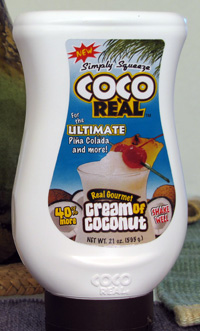 Here is a brief exploration into mixology, which, by the way, is a word apparently unknown to my web browser; as I write this it is underlined. However, Merriam-Webster is down with it and says, “the art or skill of preparing mixed drinks.” Hooah!!

A few weeks back I had a wild hair for a piña colada. I don’t remember why. Most of the time I’m not even conscious enough to know or understand why I want what I want. So I trudged down to the store and grabbed a bottle of piña colada mix, followed the instructions on the label, dumped it in the blender with some Bacardi light rum and ice and gave it a whizz.

Blech! That shit was nasty! It wasn’t even reminiscent of a piña colada.

Thus began my quest for a better tasting piña colada. My quest began at Wikipedia which listed the ingredients as white rum, cream of coconut, and pineapple juice.

I had to ask my wife for help with the cream of coconut; I’d never heard of it before. So I trudged back to the store. It two two trips to two different grocery stores but I finally found in the soda aisle. I ended up with something called “Coco Real” which is shown in the inset image. The stuff is underwhelming to say the least. The ingredient list consists of: coconut juice (pressed coconut mean and water), sugar, glycerol, salt, citric acid, mono and diglcerides, sodium alginate, xanthan gum, potassium sorbate, sorbitan monostearate, natural rosemary extract, and BHA (to preserver freshness). Wow. FDA regulations state that ingredients have to be listed in order by quantity so besides coconut, sugar, glycerol and salt are the most prevalent ingredients. Wow. But it was the only thing I could find, so we’re stuck with it.

At a different grocery I picked up a can of store brand pineapple juice. Big mistake. The first batch wasn’t very good.

Speaking of the recipes, so far we have found three:

Interesting, eh? Only the maker of the product seems to recommend cream of coconut in the same quantity as the juice. The other recipes recommend a ratio of three to one. Golly gee whiz, I can only speculate and scratch my head why the manufacturer wants us to use the most. Moral of the story: When mixing drinks don’t go by the label! Luckily we used Playboy’s recipe.

This week we tried again, only this time I picked up a much better quality of pineapple juice. And we used the Playboy recipe. Bingo! The drinks were much better (but still not perfect) and light years beyond the grocery store mix crap.

If you find yourself craving a piña colada do yourself a favor and forgo the store mix. It is well worth the extra effort.

Here’s what I did to make approx. two servings:

* Playboy’s New Bar Guide was the only recipe to refer to this stuff as “coconut cream” but I’m sure they really meant “cream of coconut.” I didn’t know the difference so, as always, Wikipedia to the rescue.