Is the #beer mug half empty or half full? The answer depends on the existence of a serviceable keg nearby. #philosophy #perspective 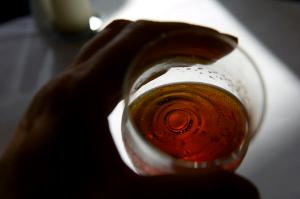 Half a beer, philosophically, must ipso facto half not be. But half the beer has got to be, vis-à-vis its liquidity – d’you see? But can o’ beer be said to be or not to be an entire beer when half the beer is not a beer, due to some recent imbibery?

I thought I knew beer. It was something I drank once in a while. Nothing special, nothing to write home about. But then I moved to Portland, Oregon, the microbrew capital of the world.

In July 2011, representatives from the Oregon Brewers Festival declared Portland had 40 microbreweries located within the city limits, more than any city in the world and greater than one-third of the state total.

Suddenly I was awash in the stuff. I was drinking a “pint” almost every day of my life. Sometimes more.

Sure, it was nice. The formula is simple:

There was, however, a problem.  A big problem. (Surprised?) I don’t like generating cans and bottles. For one thing, in Oregon, you pay a five cent tithe per container. For another, you gots to lug ’em around and shit. And I despise going back to the euphemistically-named “redemption centers” to get those nickels back. Unless you love hacking and slashing your way through a literal jungle of flies with your handy machete. So we’d end up just tossing the empties in the recycling bin, essentially a cash donation to The State. For some reason that gnawed at the very fiber of my existence.

Then, by chance, it happened. I learned of something called The Growler.

I just learned about a wondrous object known as the #beer #growler. To think, up till now, I've only been living half a life! #diminished

It was at that moment I learned that I had been living only half a life. (Prior to that I was merely radioactive.) As is often my wont, I celebrated by bursting into song…
END_OF_DOCUMENT_TOKEN_TO_BE_REPLACED

Won’t you be my asshole neighbor?

For about a month now this piece of asshole flotsam has been welcoming visitors to my neighborhood.
END_OF_DOCUMENT_TOKEN_TO_BE_REPLACED

Mr. Spock, where are you?

So yeah, there I was on the Google. I wanted a new wallpaper, so I did what I usually do: Google Image Search (GIS) with the exact dimensions of 1920 x 1200 (which just happens to be my display resolution).

Being in a logical mood, I decided to use “Spock” as a search term. I was hoping to find results of a type never before encountered.

As usual, some of the results were representative of the search term and some were not. Also, as not, there was a surprising number of frisky images of women in bikinis. Now what do they have to do with Spock? Highly illogical.

Want to try the exact search for yourself? Click here.

I kept scrolling down the image results looking for a suitable wallpaper that I could meld with, but none really moved me. Gradually, however, I began to become aware of something. Spock wasn’t in very many of the results.

I took a screenshot of the results. By only page 5 Spock was strangely no where in sight. Four of the results in this shot actually pertain to Star Trek but no Mr. Spock. There’s a couple video game shots, a Robert Downey Jr., a sexy girl in a hammock, a jumbo jet, and a refreshing glass of Coke. I guess I have to ask, “Hey, Google! Where is the Mr. Spock in this equation?”

One thing is certain. I won’t be trusting my past or future to Google computations for time warp (beta).

Google is imperfect. Abyss will sterilize. Along with all the carbon-based life forms infesting the third planet of this solar system.

This is fruitless. Release the Corbomite!