I Piss On Dothraki Laws

We were at a busy four-way stop. Amazingly things were proceeding apace. Each car was doing what it was supposed to be doing. It was like winning the lotto.

Then, finally, just before it was our turn, everything went sideways. Right on cue. The car to our right that was supposed to go next just sat there, not going and stuff.

All motion stopped. Suddenly we were engulfed in a dead calm. It was surreal. Somewhere a bald eagle screeched. I heard the shake of a rattlesnake’s tail. A chicken clucked. A fly buzzed. A tumbleweed drifted through the intersection.

All heads turned and everyone stared at the idiot. What the hell was going on we collectively wondered.

Then, with a start, the car leaped forward. Like my dad used to say, “Put it in ‘L’ for Lunge.” In a grand elegant arc the car made its left turn and aimed right at me. “Oh my God,” I whispered breathlessly into my crash helmet. “One bogey passing on the left.”

And then I saw it. There, behind the wheel, a woman was driving with one hand, had an abominable phone pressed against her face, and was gesturing wildly with the other.

She was talking on a phone!

My brain quickly calculated the meaning. Why, that’s supposed to be illegal now! This criminal had just ruined the four-way stop dream of perfection for all of us. Veins popped out on my forehead in a full relief map in the shape of Florida. My hands gestured, too, and with every force of my being, I screamed at the top of my lungs, “We’re trying to live in a society here!”

I think it was right around then that I had my epiphany. I’m willing to share it with you now. Obeying the law is for suckers.
END_OF_DOCUMENT_TOKEN_TO_BE_REPLACED 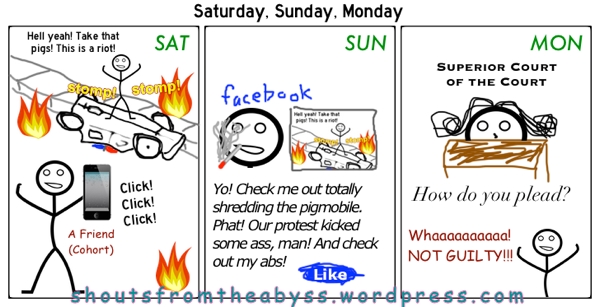 Bad news, ya big jamook. The Blogfather is going to hit your place of business. I saw what you did and it … irritated … me.

If only I can find a place to park. Dammit. That’s literally whack. The parking gods have granted you a reprieve.

The keyboard is mightier than the tommy gun, so I’m not going to use bullets. My weapon of choice is this bluetooth keyboard.