A chip off the olé otle 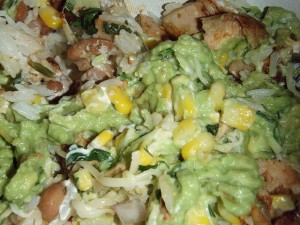 Output from a Culinary Institute of America graduate.

I received a $25 gift card to Chipotle Mexican Grill for a birthday gift. Now I don’t know Chipotle from a hole in the ground but, ostensibly, it still seemed like a reasonable gift. I knew it was a chain restaurant of some sort so I figured I’d get a meal of out the deal.

At the time we’d been in the big city for six months. I had never seen a Chipotle. Luckily, a check of the internet maps revealed there were nine to choose from within a 10-mile radius. We chose the closest and embarked on a big city adventure.

The adventure really took off in the parking lot. It was tinier than a postage stamp’s sphincter and, wisely, allowed cars to enter from both directions at the same time. So I was in a really good mood by the time we entered the eatery. (I will deliberately eschew the word “restaurant” for the remainder of this review.)

Although we waited for a space, a car pulled in and assumed it was theirs, not knowing that we had waited six hours. It was an honest mistake but the angry look on the dude’s face did make for awkward times a few minutes later when they stood six inches behind us in the line.

That brings me to the next feature of this diner: The Line. We walked into the place and the most prominent feature, the thing that really captured your attention was the humans in a queue. I looked at my wife. She looked at me. We shrugged and said the same thing. “Let’s get the hell out of here.”

All in all not a bad first experience.
END_OF_DOCUMENT_TOKEN_TO_BE_REPLACED

An error has occurred.

Drive Thru Your Face #mcdonalds

The @McDonalds Drive Thru POS Transaction Model. That stands for Point Of Sale or Piece Of Shit, I can't remember which. #NoTalking #rude

McDonald’s has the technology to fuck people via delivery.

It seems self-evident to say this, but you don’t go to McDonald’s for the service. Nor do you go there for great-tasting food. #obvious

Wait a minute. Why the fuck do you go there?

Oh yeah. Now I remember. Because you’re in a hurry and you need to cram something barely edible in your fucking eat hole because you think you’re hungry. (Even though that’s a sensation you’ve never really experienced.) Yeah, it all comes back to me now.
END_OF_DOCUMENT_TOKEN_TO_BE_REPLACED

Ooh, goodie. Starbucks fucked up. And now I get to write about it. Coffee and blogging are both trendy, right? Here I come along to daringly fuse the two. I’m calling this particular roast Blend Over.

We all know the ONLY reason to start a coffee stand is to show off your cleverness with a punny business name. I'm calling mine: Perk O Set.

Long story short, on the top of my blog somewhere it says, “Product Reviews.” On that page you’ll find this nugget of wisdom:

Send me your shit. And I’ll tell the world how it sucks. For free. I promise to be honest and fair and completely impartial.
–Tom B. Taker

Completely impartial. Right. That’s because we all know I can’t be bought.

And now for my review.
END_OF_DOCUMENT_TOKEN_TO_BE_REPLACED

Merry Christmas, son. I got you some Klout.

First I saw vague references to something called “Klout” on tweets. Things like “I just Klouted someone” or “I got nudged on my Klout.”

Since I didn’t know what a “Klout” was, my brain utterly ignored these tweets. They were invisible. (I know I just contradicted my first sentence. STFU! Hey, who’s the writer here?) Much like the native peoples who couldn’t see European “tall ships” offshore or the way I can’t find the mayonnaise jar when my wife has moved it front and center on the top shelf in the fridge.

Eventually I learned that Klout was a website/company that provides “social media analytics.” Finally! A company to fill that need in our society. Screw the 1 billion or more people without access to safe drinking water and the 2 billion without access to toilets. We got Klout. Yeah!

Naturally I signed right up.

I learned that Klout measures “influence.” As near as I can figure, this a measurement of how good you are at getting other humans to do that most holy of acts: spend money.
END_OF_DOCUMENT_TOKEN_TO_BE_REPLACED

Yeah, I did it. I upgraded to Mac OS X Lion. Here’s my mini review:

Installation was painless and quicker than I thought. I was expecting 12 hours for the download, but it took less than two. My internet connection must be faster than I thought. (I know a certain someone for who the download was more of a chore. Heh.) Then the computer had to crunch for about 30 minutes to perform the install. When I came back, it was at the login screen. OS update done.

So, what’s new? Here’s what I’ve noticed so far:

That’s it. Those are literally the only things I’ve noticed. System speed seems about the same as it was before. Overall, a very pleasant upgrade, but as I sit here and type into my little WordPress post box, literally almost nothing looks different than it was before.

It all feels very incremental. Something tells me that’s the future of upgrading.

Blame It on Roku

Well, well, well. Netflix has had a busy week. First they announced they are raising their rates by 60%. In my humble opinion, in a single stroke, they went well out of their way to create ill will where previously there had been none.

Smooth move, Ex-lax. You just pissed off a lot of people and made them start thinking about taking their business elsewhere.

I don’t want to bury the lead (like I usually do) so I’ll interject this right now: Netflix has been down all day.

Worse, they advise you to visit a page on their website. When you do, they claim that their systems are completely operational and then tell me to call the company that make my Roku device.

“Don’t call us! Call that other company. You know, the company that makes it possible for us to run our business and deliver our primary product. Yeah, fuck them. We’re clever that way. Our Netflix scientists have discovered that pushing our problems onto innocent third parties seriously saves us a lot of money.”

Come to think of it, the Netflix service on the Roku has been sucking some majorly serious ass for a couple of months now. I’m talking about lots and lots of errors. Lots of little images that don’t load. Entire categories that remain blank and won’t let you select anything. And even when the system is working, the service is sluggish as hell, like when adding or removing a series from our instant queue. The refresh time is unbelievable.

Another problem: The streaming service almost never has the movies that we want.

The most recent example of this was yesterday we saw Jennifer Aniston on the Actor’s Studio. They mentioned a movie called The Good Girl. I’d never seen it. So we flipped on the Netflix, did a search and got nada. Another buttfucking courtesy of the Netflix. I think that is like ten searches in a row where search for streaming content has failed.

So what are the primary problems with Netflix right now:

And this is when they choose to raise prices? Wow.

I’ll say this. Until now I’ve been a loyal fan. I would have absorbed a $1/month rate increase without complaint. That would have been a 10 percent jump which is still pretty amazing in this economy and with an unemployment rate of 9.2%. I may not have graduated with a degree in business from Harvard, but something tells me the current economic climate may not be the best when it comes to jacking the rates on an entertainment product that competes for increasingly scarce disposable dollars in a budget that is shrinking or under threat in most households.

So today I explored the other channels on my Roku device. Unlike Netflix they all worked just fine. And I got to watch something extremely interesting and unusual.

By the way, if you want to find the status of the Netflix service, there is a way to do it even though Netflix provides none. Go to a website called “Down Right Now” which uses “crowd-powered service monitoring.” Sadly this a website like this fills an important niche as service providers fall woefully short.

I’m not quite ready to give Netflix my lowest possible rating but they had better watch it, because they are getting very close.