A hop, skip, and a jump up the Columbia River. There and back again. A gobbet’s journey.

Last Friday my wife and I left the PDX zone and carved our way up the Columbia River Gorge. This is our humble travel blog.

Why is this called the “BBB Edition?” The clever reader will find three “B” words carefully hidden within this post that will illuminate. See if you can find them all.

All photographs taken by Tom B. Taker except where noted.

Base camp. PDX. Stumptown. The City of Roses. Rip City. Bridgetown. Portlandia. Beervana. Little Beirut. The largest city in Oregon. A place where things are kept decidedly weird. The proud home of Voodoo Doughnuts and Salt & Straw where we trick tourists into waiting in line.

We loaded our cameras in our trusty Suburu Outback with big plans of driving 10 mph slower than other traffic on the highway. But first we swam the majestic Willamette River which is 99% microbrew beer and a superfund site. That’s multitasking.

Our day was going to consist of a short jaunt up the Columbia River Gorge that, regardless of Sunset Magazine’s penchant for Highway 101 on the coast, is arguably the most breathtaking scenery that Oregon has to offer. The same Columbia River sailed by Lewis and Clark and the Corps of Discovery in 1805. Fun fact: There were slightly less McDonald’s back then.

The Columbia River Gorge began forming as far back as the Miocene (roughly 17 to 12 million years ago), and continued to take shape through the Pleistocene (2 million to 700,000 years ago). During this period the Cascades Range was forming, which slowly moved the Columbia River’s delta about 100 miles (160 km) north to its current location.

Although the river slowly eroded the land over this period of time, the most drastic changes took place at the end of the last Ice Age when the Missoula Floods cut the steep, dramatic walls that exist today, flooding the river as high up as Crown Point. This quick erosion left many layers of volcanic rock exposed.

It was here we discovered that my wife’s camera liked to say “LENS ERROR,” most likely due to a single grain of sand and photography was, of course, the primary objective of the trip. Perfect!

Pro Tip: We hit the I-84 Multnomah Falls parking lot before 8am on a Friday. It was just as secluded as we dared to hope. A foot path is provided under the interstate to the grounds where we found an even closer parking lot. (But I have no idea how to drive there. Dammit.) There is also a lodge with a forestry information center, gift shop, and restaurant.

Fun Fact: “Multnomah” is an indigenous people’s word in the Chinookan dialect that means “downriver.” 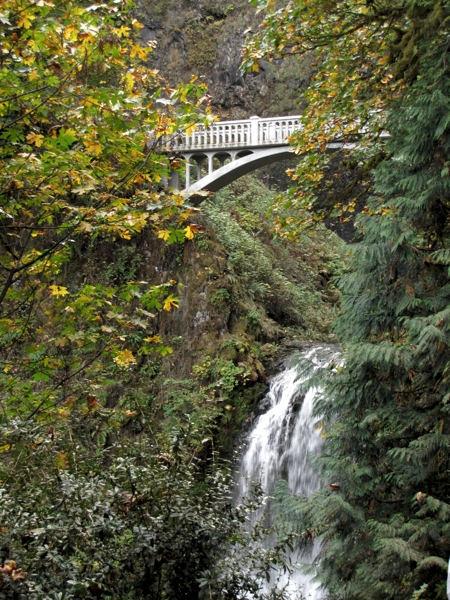 3. Bridge of the Gods, Oregon/Washington

Recently made famous in the movie Wild, the Bridge of the Gods is a piece of metal that crosses the mighty Columbia River. It’s also part of the Pacific Crest Trail. We decided to join the elite group of adventurers who have hiked the trail by walking across the bridge. This is no small feat. There’s no pedestrian lane or sidewalk so adventurers are forced to dance among the cars and trucks.

Before attempting the bridge, we saw a group taking off on the Pacific Crest Trail. Then, while paying our $5 fee to park, my wife was stung on the top of her head by a wasp. The bees are hidden inside the park sign. Clever. In addition to being our third B-word this made her dizzy and queasy just in time for dangling over the river. Good times.

Fun Fact: Near the location of the modern Bridge of the Gods was a natural dam created by a mudslide that eventually breached and was washed away by the river, an event “remembered in local legends of the Native Americans as the Bridge of the Gods.” (Wikipedia.) 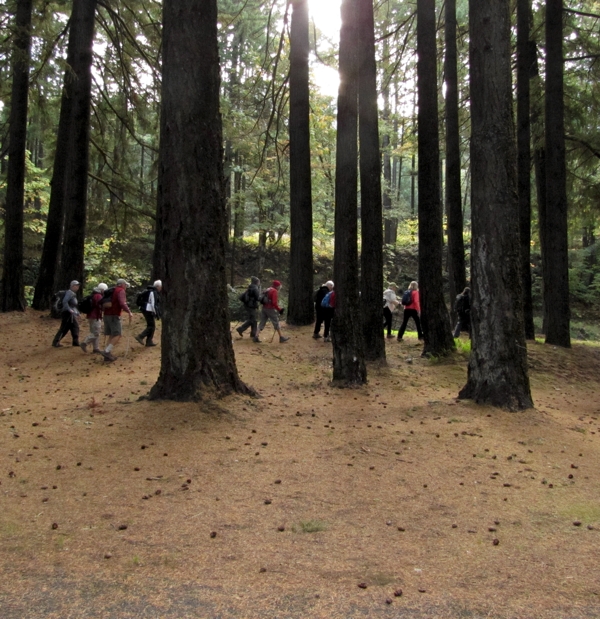 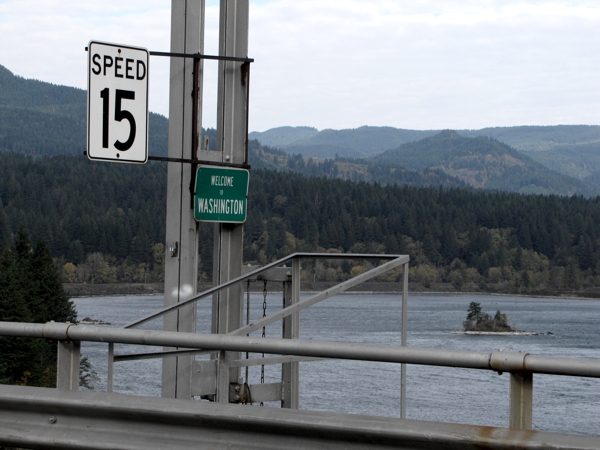 Our next stop was a viewpoint high above the Columbia River that offered amazing views of the gorge to the east and west. It’s on the historic U.S. Route 30 which is the same road right down the street from where we live. This highway stretches all the way from Astoria, Oregon to Atlantic City, New Jersey. (Lombard Street in Portland is also known as The US 30 Bypass and crosses the St. Johns Bridge where protesters recently dangled trying to stop Shell Oil.) We found sign in the form of a single boot that not all hikers survive to tell tales of their visit to Rowena Crest. On the Washington side of the river the peak of Mount Adams was visible in the distance.

We stopped for lunch and had panini (plural) in a church that has been converted into a restaurant. It was a welcome respite from the burden of our wheel-based travels.

Driving further east on I-84 we eventually crossed the Columbia River into Washington at Biggs Junction, Oregon, using the Sam Hill Memorial Bridge. No, not that Sam Hill. This Sam Hill came later and was a famous Oregonian who in the early 1900s championed modern roads along the Columbia River Gorge and in the Pacific Northwest. He tried to found a town in this location which is now known as Maryhill.

Nearby is a full-size replica of Stonehenge he built in 1929 as a World War I memorial. Sam Hill really liked to built things.

He also built a fantastical structure that was originally going to be his home but eventually became a museum featuring items gifted by Queen Marie of Romania, works by Auguste Rodin, and artifacts from indigenous peoples of North America. The structure is quite an oddity in the middle of nowhere perched on a ridge high upon the Washington side of the Columbia River.

I didn’t take many pictures here because the museum tour took two hours so I’ve borrowed one from Wikipedia.

“MaryhillMuseumFront” by Cacophony on Wikipedia. Licensed under CC BY 3.0 via Commons.

We came back home on the Washington side of the river, then crossed back into Oregon at the Bridge of the Gods. This put us in the town of Cascade Locks where we found the Brigham Fish Market and met some wonderful people who loaded us up with chowder and salmon. When we got back home we already had a delicious dinner and didn’t have to cook because our trip had taken 12 hours. Smart. 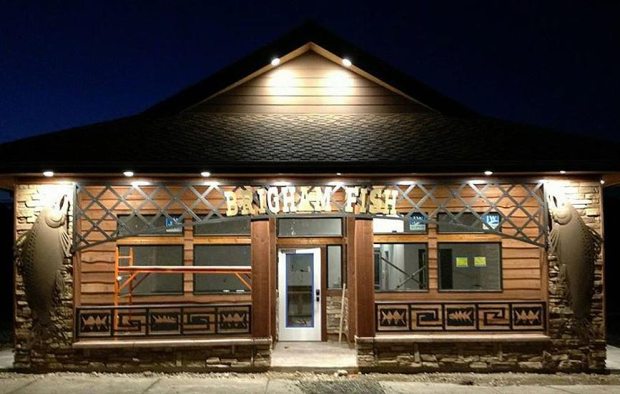 Finally we arrived back home and concluded our trip: Bridges, Bees and Broken cameras. We hope you enjoyed the ride.