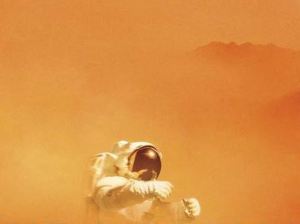 Spoiler alert: For astronaut Mark Whatney, former Martian, it was a bad trip. Upon his safe return to terra firma he tossed his helmet away, breathed deeply and said, “Fuck space.”

He was still an adventurer, though, so two years later was exploring the depths of the deepest oceans on Earth when he was accidentally left behind.

There he was forced to grow seaweed and sea cucumbers and survive on oxygen he derived from shells and Bunsen burners.

Mark Whatney had become The Crustacean.

I won’t spoil that ending, either, but he did eventually return to space travel.

Venus: Whatney daringly visits the second planet in our solar system and his faceplate is briefly blown loose during an EVA. Yes, you guessed it. He becomes The Venetian Blinded.

His eyesight eventually returned and he went on to visit Uranus, but I have absolutely nothing to say about that trip.