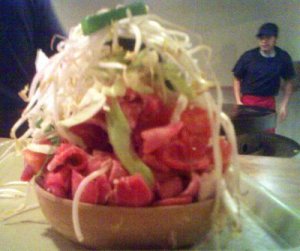 The point is, I love me a mean Mongolian BBQ.

When we moved to the big city, I was delighted to find a Mongolian BBQ restaurant right up the street. “This is exciting,” I said. Then I read their reviews. Ugh. Not good. My wife proclaimed she’d never go. Dreams were dashed. I felt like a wet noodle. Disappointment is my middle name. Thanks a lot, crowd sharing opinion freaks.

Then one day an email came. It was a LivingSocial deal. And it was for a Mongolian BBQ restaurant in our area. The promotional email made the place look like it walked on water. The place must be good, I thought. Just look at that promotional stock photography they used in the email. That food looked like the bomb.

Then I looked again. What a minute. What’s this? Yep. It was the same damn place. Oh man was I fried, and not in a good way.

I learned a LivingSocial lesson that day and I learned it well.

Then the other day I was surfin’ my iPad and another email from LivingSocial came in. They called it a “Daily Gem.” Mmm. Lookie there! Indian food! Oh yeah, I am so down with that. My earlier concerns were momentarily forgotten. Did I mention Indian food?

The email promised a Grabthar’s Hammer’s worth of savings, too. Only 9 for $20 in food. Sign me up. Eagerly I clicked the shiny blue “view deal” button. As if like magic I was whisked away to the LivingSocial official website where, legend has it, boys were taken to become men.

But then, unsurprisingly, there was a wee little twist. Read on for the saucy details. 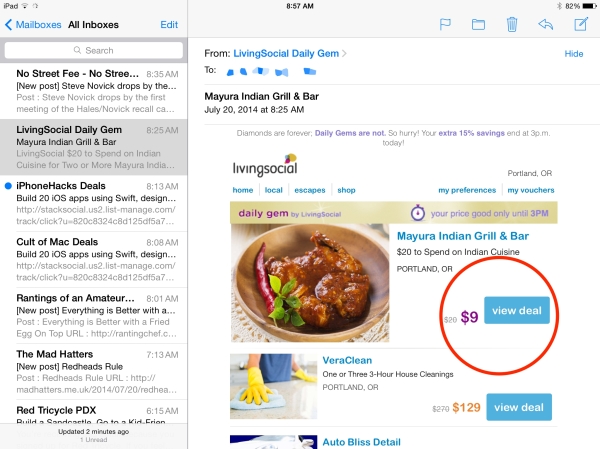 What the hell? I clicked “view deal” and suddenly the “buy now!” button reincarnated at $11! That’s quite the promotion. I was so flabbergasted I took the screenshots to prove it really happened.

To be honest, I don’t know who messed up. It could be the merchant. It could be LivingSocial. All I know is that things like this leave me feeling testy. Hmm, I wonder if that’s on the menu? Mmm. Kapura Kaleji Masala. I’ll have that.