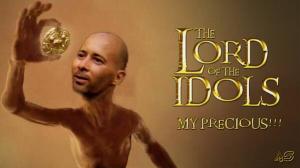 There are two things I like. The reality TV show Survivor and the reality social show Twitter. These are a few of my favorite things.

Survivor is a delight as a little microcosm of humanity. An animated diorama world of greed and bad behavior inside the magic box. What’s not to like?

Twitter, with its 140-character limit, is a short and sweet. In the right hands it can be art form. In the wrong hands? “I’m on the can” or “I’m drinking a smoothie.” Often in the very same tweet.

I’ve been religiously watching Survivor since day one when Richard Hatch won the inaugural season in Borneo. I never miss an episode.

Earlier this year, when Survivor Cagayan, the 28th season, was announced, I did something new. I used Twitter to interact with some contestants on the show. The worlds of Survivor and Twitter collided like chocolate in my peanut butter.

The theme of this season was “Brawn vs. Brains vs. Beauty.” 18 players divided into three groups by stereotypes. Since I’m ugly and utterly without strength, I gravitated towards the Brains. They were my team.

After careful review, and two full weeks before the first episode, I made my pick. Kass McQuillen.

Have you met @KassMcQ? She's going to kick some ass on #Survivor #Cagayan. #FF #brains

It was fun interacting with Chaos Kass (a nickname she’s earned in the show). I’d mention her in a tweet and she’d click “favorite” on it. Rob Cesternino, another famous Survivor, calls this “sucking kneecaps.” Whatever. It was the closest thing to an actual conversation I’ve had in years.

A few times she actually replied or retweeted things I said. And, this one time, she even followed me. Twice! But then she announced her account had been hacked and the follows weren’t intentional. That hurt.

The season progressed and I followed along. Due to Twitter I felt like I really had someone to root for in the game. Eventually she made it to the final five (this week), even surpassing Cesternino’s pick who was voted out in 11th place. Suck on those kneecaps, my friend. I just outwitted, outplayed and outlasted you. Seriously, why don’t people listen to me more often?

Along the way, Choas Kass, I guess, made an enemy of a member of her alliance, Tony Vlachos, a cop from New Jersey. Tony is this season’s resident villain and dufus. The producers give him a lot of screen time. Kass described him as a mafia boss. He’s manic, narcissistic, petulant, suffers from ADHD and is just a little bit nuts. And he’s found immunity idols. He wasted one in the past but currently he still has two.

The producers of Survivor, in their quest for drama, love coming up with twists. Immunity idols, redemption island, tribe swaps, etc. These are meant to drive action and keep things interesting. But the producers aren’t perfect. Sometimes they make mistakes. By allowing Tony to possess two idols this close to the end of the game, they sucked all the drama out of Tony’s story line. It was obvious long ago he was going to make it to the final four where his precious idols can no longer be played and automatically convert into souvenirs.

Thus, the only remaining question involving Tony is this: Will he make it to the final three or not? It’s been this undramatic for a few weeks now. Big mistake in my opinion. Survivor is not a game where it’s fun to watch players coast on autopilot.

Meanwhile, as the weeks go by, I’ve been following certain players on Twitter. As they watch episodes for the first time, they’ll make comments at each other. It can be interesting. Some are jokes but some are snipes. Are they just playing or is there really bad blood? They obviously have inside info on how the game ended up that we don’t have yet, so they could just be fooling around.

Then, the other day, Tony said in a tweet about Kass being hated that she is “bad soul” and a “nasty person” and called her “sad.” Tony isn’t exactly the classiest guy of all time.

Like Tony, Kass is playing the game. And that seems to be something he just can’t abide. It’s okay when he does it but he freaks out when anyone else does. Tony gets lots of props for playing a “good” game but has he really? What’s his strategy been? It’s a brilliantly petulant approach: He targets anyone and everyone who pisses him off. That’s considered good gameplay? Hell, I mastered those techniques by the time I reached kindergarten.

Kass has her followers and Tony has his. But during the last few weeks I’ve been acting as a Kass booster and may have said a few things about Tony. Nothing horrible, mind you. We all know that I’m a nice guy. 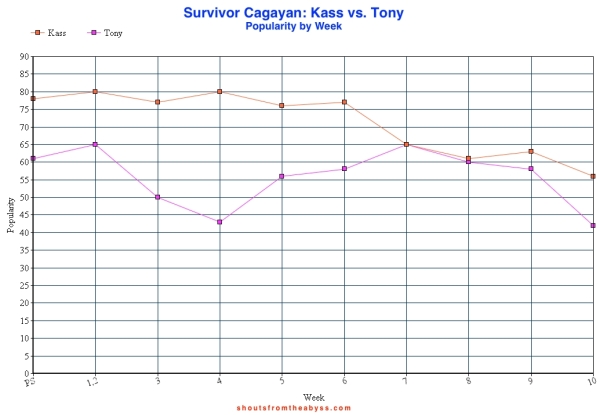 But then! Wait! Hold everything! I went to click “favorite” on one of Tony’s tweets and Twitter got weird on me. It wouldn’t favorite. Since Twitter barely works most of the time, initially this wasn’t too worrisome. But then I started to get a feeling. What if Tony had blocked me? I went to his profile and clicked the “follow” button.

“You have been blocked from following this account at the request of the user.”

Sounds like fun. Meet me in the spy shack. Let’s go!

After hours of painstaking research, I came up with a grand total of seven tweets (prior to blockage) where I had ever mentioned Tony’s account. Here they are (currently on loan from the Abyss Museum of Unnatural History). These tweets are presented as is without bias or prejudice. They are what they are. 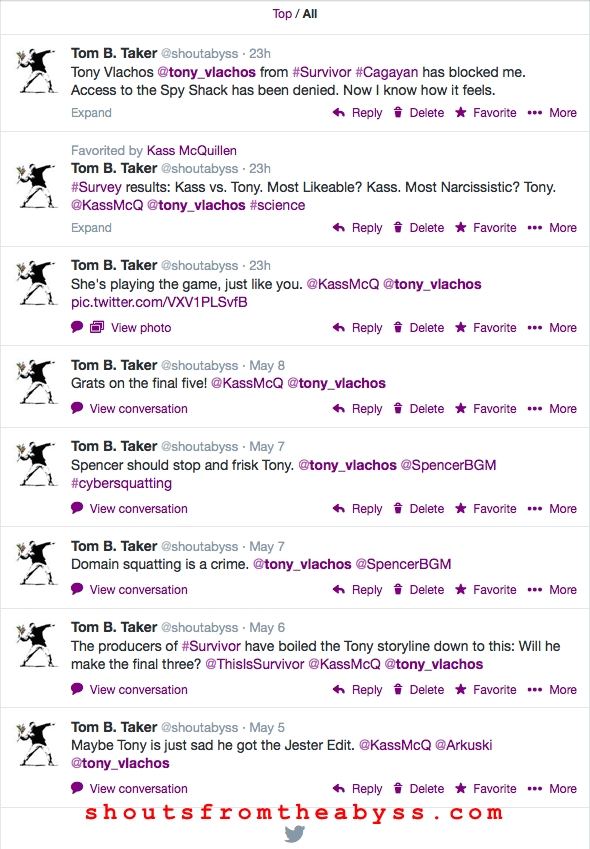 Personally I think I was rather well reserved and behaved.

There we have it. This is what it takes to get blocked by Tony Vlachos. Thin skin much? Surprising for a Type A personality recruited into the world of Survivor, eh?

By the way, what is a Twitter Block? It’s a mostly symbolic gesture. It’s Twitter’s way of saying, “Talk to the hand. Na na na na na! My fingers are in my ears and I can’t hear you.” But unless you make your account private, ultimately it has absolutely no effect. Your tweets are still public. I can still view your profile. I can still mention you in my tweets as many damn times as I want. So what if I can’t favorite your shit any more? I was only doing it to be nice.

So while Tony is publicly saying things about other people like “bad soul” and “nasty person” he can’t handle a tiny fraction of that in return. My tweets are there. You be the judge.