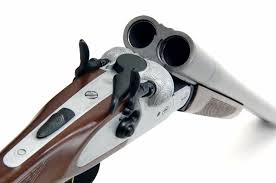 I have no idea if this is a 20 gauge. This is not a blog particularly concerned with the accurate identification of firearms. I do believe, however, it is a shotgun.

This week brought the news that a 12-year-old boy in the 8th grade took a loaded sawed-off 20 gauge pump shotgun to his school and opened fire, seriously wounding an 11-year-old boy (shot in the face) and a 13-year-old girl in the school’s gym.

The New Mexico state police stated that the attack was “planned.” Part of that planning included the shooter issuing warnings to friends, advising them to stay away from school.

The 20-gauge shotgun is a type of smoothbore shotgun shell that is smaller in caliber (.615) than a 12 gauge (.729). It is often used as a beginning shooter’s practice round and is noted by its yellow hull.

A 20-gauge shotgun is sometimes considered more suitable for hunting certain types of game, because it damages less meat, which makes it suitable for most game birds.

The firearm was obtained by the shooter from “family members,” the police said. The shooter’s Facebook page featured a picture of the shooter beside a deer he had killed during a hunting trip.
END_OF_DOCUMENT_TOKEN_TO_BE_REPLACED