Tales of the Moved 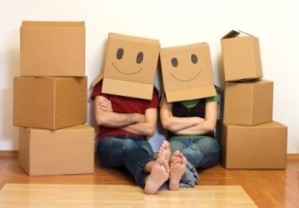 And now a few exciting storyoids from the Mover’s Notebook…

The greater the change, the greater the likelihood it will stab directly into your heart like a stiletto and abscond with your life.
–Tom B. Taker

As some of you may already know, my wife and I recently made a big move. Excepting a trip to Mars (where I’m currently on file as a one-way volunteer) it ranks as pretty substantial as far as moves go. We went from the quiet rural lifestyle of a tiny goat farm in the Himalayas and a village of 42 souls to one of the most urbane existences possible in the heart of a big city: Portland, Oregon.

What follows are a few of our observations and experiences.

I hate people who think they are above the law. How rude! Such bad form! Like people who park in the fire lane to use the ATM rather than walking the 20 feet from a legitimate parking space. Or people who say they made charitable donations on their tax returns when they really didn’t. I loathe and despise that sort of thing.

People who park on the wrong side of the street also make that list.

Yet here, in Portland, there’s so much of it that it’s hard to imagine that it’s actually illegal. In fact, it almost seems like parking on the wrong side of the street is the norm and parking legally is the aberration. It’s that prevalent.

I decided that when in Rome I may as well park my chariot where I see fit. Go with the flow.

Most of the people we’ve met have been nice. Some extremely nice. Some just regular nice. Most people just move along with a purpose, on their own journeys from Point A to Point B, minding their own business. You leave them alone and they’ll leave you alone.

And then there’s that other group. The group with the look in their eye that says, “I’m hunting.”

What are they hunting in an urban environment? Not to put too fine a point on it, they are hunting you. Or, more specifically, your wallet.

These are the Asker people. The people who don’t mind intruding on the lives of other people and asking for stuff. Unlike regular people who make no effort at eye contact, these people have eyeballs that are laser beams. If you happen to look back, target lock is acquired, then it’s game on.

We were at one of the millions of food cart courtyards. This a parking lot with picnic tables in the center and surrounded by food cart vendors. One of them had an old bus converted with beer taps down the side.

While we sipped our wine an interesting looking fellow entered the area. He wandered from table to table having brief conversations then moving on. Either he knew everyone or he was shameless about The Asking. Finally he looked at me and I looked right back.

I doubt Usain Bolt could have gotten in my face any quicker.

“What do you need?” I replied.

“Enough for a burrito.” He pointed at one of the food carts. I took out my wallet and flipped him a $5 bill. Yet still he remained.

“Yeah,” he replied. “This isn’t enough for bus fare, too.” I flipped him $2 more. Lesson learned. Do not make eye contact. If I have to donate $7 to the universe every time I step out my front door I’m not going to exist very long.

In a different incident, my wife and I were trendily sitting at a trendy outdoor coffee stand sipping our trendy coffees drinks with unpronounceable names. It was a very trendy thing to do. As one who seeks to buck trends, I told my barista to dump a pint of granulated sugar in my cup of joe, which really offended him. Apparently he hates the name Joe.

While we sat there I watched a wee speck on a distant sidewalk approaching. It gradually grew in size until it took on the resemblance of a chewed up man. He lumbered closer and closer until finally he was amongst the picnic tables at the coffee stand with us. I could sense he wanted to engage me in conversation and I stubbornly refused.

He did not go up to the window to place his own order. He just sort of hovered in our shared space like a Harrier jet not sure if he wanted to land or not. Long after the point of awkwardness I saw him mentally shrug, then off he went, back in the direction from where he had just come.

WTF, I thought. This is fucking weird.

I thought about tipping him just to say thanks for not actually asking me for anything. Is 20% about right?

Then, as we were leaving, we saw him come in again for another pass. We escaped. Close call.

Last night was our first experience putting out our myriad of waste receptacles. All 42 of them! It was so exciting.

There’s a yellow tub for recycled glass. There’s a blue bin for other recyclables. There’s a green bin for the composting materials. And, last but certainly least, a plain, sad, smaller black bin for the actual garbage itself. Almost an afterthought and certainly bad form. I felt dirty wheeling it out to the curb.

Then, after watching some TV, I stood up, wearing nothing but my underwear, of course, and … Holy shit! There’s someone out there! I shrieked in embarrassment and held a camisole in front of me to protect my modesty as I peaked out our huge front window.

Yep! There’s definitely someone out there. By our garbage cans. With all the lids flipped up. Going through our shit. WTF?

I turned to my wife and declared, “Now that’s some premium big city living! You don’t get that in the Himalayas.”