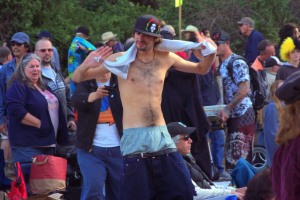 Real life example of someone thinking he is the shit.

Once upon a time there was a little movie called Back To The Future 2 – This Time It’s That Time. Ol’ Doc Brown lands his DeLorean out front, picks up Marty McFly, then takes him on a ride to the future because Marty’s as-yet unborn son is in some kind of trouble.

Doc’s plan is for Marty to imitate his progeny long enough to resolve the trouble. Brilliant. What could possibly go wrong?

The whole plot of BTTF 2 is predicated on a cutesy throw-a-way line at the end of BTTF 1 when Doc and Marty have this conversation:

Doc: Marty, you gotta come back with me!
Marty: Where?
Doc: Back to the future.
…

Marty: Wait a minute, Doc. What are you talking about? What happens to us in the future? What, do we become assholes or something?
Doc: No, no, no, no, no, Marty, both you and Jennifer turn out fine. It’s your kids, Marty, something has got to be done about your kids!

I call this type of phenomenon Star Wars Syndrome. It’s what happens when your movie is so successful that a sequel becomes mandatory but something you thought was a cute detail at the time actually paints you into a corner and now you’re committed because the fans will only tolerate so much hinky nonsense with the storytelling. (Unless you’re J.J. Abrams, of course, then you simply don’t give a shit. You just stuff it in your Mystery Box.)

Because of this, when they made the BTTF sequel, they had to have the storyline be about a trip to the future – no matter what. And then, because of disturbances to the timeline, Marty’s father and girlfriend both end up looking like completely different actors.

My point is this: In the future Doc Brown tells Marty to pull his pants pockets inside-out, because that’s what the kids think looks cool and if he doesn’t, he’ll stick out like a sore thumb. 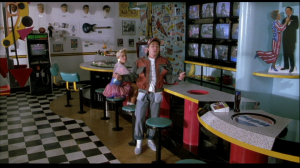 Hollywood’s idea of what kids will think is cool in the future.

At the time, of course, I remember thinking, “Say what? That’s the best thing in the future they could come up with? Lame! Not even close. They should have put in more effort.”

But then something funny happened. Kids these days went and made the movie look like an improvement on reality. I’m talking about, of course, baggy pants hanging down low.

It makes one look stupider than wearing a baseball bat backwards or dangling your hand limply over the top of the steering wheel or even getting five pounds of hardware to pierce your own face.

Which brings me to my other point: Kids these days. You know what I’m talking about, right?

A friend of ours asked us if we could hire his son to do some odd jobs around the house. He said, “Work him hard. It’ll do him good. Don’t hold back.” Yeah, right.

I thought about it and said, “Well, every time I move my CD cabinet gets screwed to hell. I could use him to put my CDs in alphabetical order. That way I can find what I want when I want it.”

So it came to pass that I hired this kid for $10 under the table to sort my CDs.

I took the kid aside and said knowingly, “This is good work when you can get it, eh? Easy money!”

The kid was underwhelmed to say the least. He mumbled something about the word “Meh!” and shrugged, causing his pants to land around his ankles.

I moved on to explaining the complexities of the task at hand. I was the project manager. Wisely I decided to forgo the usual Gantt charts. After all, this was a developing brain we were dealing with.

The goal was to rearrange the CDs in a certain order, an order that would be dictated by the sequence of letters in the English language alphabet. “You do know the alphabet, right?” I asked.

He assured me he did. Kids say the darndest things, don’t they?

The system was simple. If the musical artist was a person’s name, file the CD under their last name. If it was a band name, file under the first letter of the band name. Thus, “Clint Black” would be filed under “B” and so would the “Butthole Surfers.” It’s a simple system.

The reason I bring all this up is because I just went looking for a certain CD. You guessed it. I was unable to find the damn thing. I’m still amazed to this day how the kid’s brain worked. What I paid for was a fresh scramble of my collection that bears no resemblance to any alphabet in use on the planet.

I could grab someone off the street, tell them my cabinet was a logic puzzle, and offer them $100 for the correct solution. “Now tell me,” I’d say. “What can you glean from the order of CDs in the cabinet? What is the system that was used to determine the sequence of CDs? Take your time. No rush.”