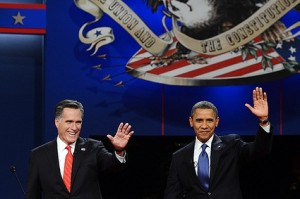 The first presidential debate. The tie situation is secure.

Right after watching the third and final presidential debate I turned to my wife and said, “Just you wait. Both sides will claim victory.”

And that was before I’d heard even a single pundit tell me how to think. Yeah, I did it all by my own self.

That establishes my cred. You may now read the rest of this post with confidence. I have dubbed myself the Master Debater and I’m going to share it all with you. You’ll see.

This is my insightful analysis of the debates and I promise it will be my own style of unique coverage. I’ll cover the angles that the rest of the so-called “experts” somehow missed. Let’s get right to it.

I’d like to thank WordPress for hosting this post and myself for inviting me. The Abyss is a lovely place. It’s a pleasure to be here.

Think back. Way back. To the world that existed before the debates. Obama was running away with it. Polls showed him pulling ahead nationally and the electoral map, based on state polling, was predicting a big Obama win. There was a lot of screaming from Republican polling experts that the data was all skewed, the polls were asking the wrong people and such, and that Romney was actually in the lead. The polls were all wrong.

Unique Abyss Coverage Factoid: Look carefully at the photos in this post. Go ahead. Look. Right now! Specifically check out the tie color choices the candidates made. In debate #1 it was traditional. Each candidate wore his party color. But in debate #2 there was underhanded and snarky tie color reversal. WTF? Then, by debate #3 the colors returned to normal.

I submit there can only be one conclusion. The candidates were in cahoots on the tie color thing. They were deliberately fucking with us. Why? That’s the real question that needs to be answered here.

They do make ties in other colors, ya know?

Remember: For unique political commentary like this, the Abyss is your exclusive home on the internet. We’re here for you!

Then we had the first debate, Romney “won” the debate, and the narrative changed almost overnight. “Hey, look! The polls show we’re winning! Yeah!” Funny how one day you hated polls but loved them the next. Weird. Fickle, right?

The story on the first debate was that Romney won. It was a huge story. And it fit exactly the narrative that The Media needed to keep interest hopping on a story that was just beginning to get a little boring. Interesting how that works, eh?

We were told that Romney was “feisty” and came loaded for bear and that he, somehow, looked more “presidential.” Obama was lackluster and looked down a lot. (Horrors!)

My take on the first debate was a bit different. Romney “cheated” by aggressively ignored the debate format rules he had previously agreed to follow. In essence, he became the de facto moderator of the entire affair. He moderated himself, Obama, and even the moderator. That poor overmatched PBS fellow. And he played fast and loose with the facts.

In my opinion Obama was more respectful and on target. I didn’t see the “loss” that everyone else did. If anything, I thought it was more of a tie. And I was offended by Romney’s behavior.

By the second debate, it was painfully obvious that both men had learned the lessons of the first debate. Be pushy. Be aggressive. Push the rules of the format. That was the way to a “win.”

The greatest democracy in the world was being treated to the kindergarten version of “he hit me first.” Great fun and, coincidentally enough, a great way to pick a president, too.

Big Bird took a hit. Binders full of women got it’s fifteen minutes of fame. In the end, The Media decided that Obama won.

Hey. What are the odds? That builds perfectly to the excitement of a decisive rubber match. A winner-take-all debate. The best two out of three. The winner claims the prize and the loser goes home. We sure love the drama of all-or-nothing. It’s just like the baseball playoffs. Nothing, I mean absolutely nothing, is sweeter than a Game Seven. It’s what we all live for.

The third debate. This shit is serious. No more fucking around. Tie powers activate!

Speaking of which, that segues nicely into the third and final debate that took place just the other night. Finally the American television viewing audience was given a real choice. Watch the third debate or literally watch Game Seven in the baseball playoffs.

Score a big win for The Media. Well played. No matter which way you went they still won. The game was rigged. The fix was in.

Right off the bat I noticed that Romney’s American flag lapel pin was noticeably bigger than Obama’s. It was an interesting strategy choice. Compensate much? And all this time I figured politicians grabbed them from the same fishbowl before heading out on stage. The size difference on display put that notion to rest once and for all.

And what a debate it was! Who looks presidential now? Foreign policy is a serious topic. That’s why each candidate employed a crafty strategy of refusing to answer the questions as asked and steer it onto topic of their choice. For example, asked about America’s reputation, Romney prattled on about jobs and the economy for a while. Obama did some of this, too.

From the begininning it was obvious that, this time, Obama was the feisty one. He looked deadly serious. He looked “presidential.” He had the presidential je ne sais quoi thing going on. He was on the prowl. He floated like a butterfly and stung like a bee.

He tried to land a few blows early but they were only glancing hits. They fell a little flat. They felt forced and rehearsed, like they were in search of an effective opening and, when that opportunity didn’t come along, they were launched a little early just to be sure they at least got in there. I’ll be honest. He felt a little mean.

Romney, meanwhile, seemed like a beaten man. He was lackluster. He meandered. He agreed with the president far too much. He had very little actual content. He spoke and used up his time, but his words said little.

That’s when I called it. Obama won. And the Romney camp would still claim victory. But that’s the thing about presidential politics, right? Reality has remarkably little to do with choosing a president.

* Note: In the spirit of full journalistic disclosure, I admit that no actual debates were watched by this reporter so as to not taint my coverage. Game Seven was awesome. A real nail-biter all the way to the final pitch. Okay. I admit I didn’t watch that, either.