Time to T.P. the Blog #poop

Yes, there’s a crapp for that. Siri says, “Very good! Just one more push and you break the record.” #TMI

My blog may be an expert authority on poop but I do try to keep it classy, ya know?

So yeah, yesterday I left out a key point that probably changed the flavor of the whole thing. Well, maybe not flavor, but you know what I mean. I’m going to literally pick things up right where we left off.

And that’s the point of today’s article. I’m going to take you on a firsthand tour of the complicated world of small office politics, protocols, mores, values and norms. Just think of me as your very own amateur poop sociologist.

As you might imagine, in a small office little grotesqueries can become big problems if left untreated. That’s why they need to go to the treatment plant. It’s natural for humans to come up with way to cope in the face of unimaginable horrors.

Most of us have the sense to know not to do certain things. We instinctively feel with our gut, much like Captain Kirk, when something is bad form. But then again, some of us don’t. This post is directed at them.

In a tiny office certain rules, by grisly necessity, often need to come into play. Especially an office that is approx. 20 x 20 square feet. With four human beings and a fucking dog full time. (Don’t ask.) And sometimes the boss’ wife. And sometimes the boss’ kids. And the boss’ disgusting kitchen. Did I mention the room is tiny? Hell, my master bedroom is just about as big.

Somewhere in the middle of all this mayhem sits the office toilet. It’s where all these people go to do … well, you know. No need to be gross, right? It also happens to exist in the physical universe less than six feet from my workstation. Joy! 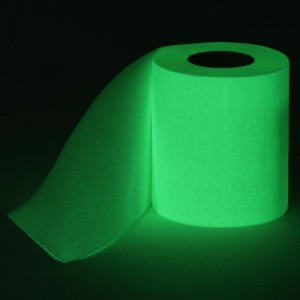 When on the toilet in a power outage never feel around in the dark for supplies. Ever! Especially if the boss has been there first. This glow-in-the-dark toilet paper can be a real lifesaver.

One bit of office etiquette that I personally feel is important is trying to minimize the “impacts” of one’s toilet use. You know, inconsequential things like washing ones hands, trying to be quiet during the act, employing a fair amount of alacrity, putting the seat down, disinfecting the seat with an industrial Pin Sol/Clorox Beach cocktail, replacing the toilet paper, turning on the fan, sanitizing, and using the deodorant spray. (If it is provided, which is rare. That’s why I maintain my own private reserve. Hell, currently we don’t even have paper towels to dry our hands.)

Those are all good things, but they don’t quite go far enough. There’s one more step that I consider critical. I believe there should be a T.P. phase that takes place between different users of the facilities.

A Transitionary Period (T.P.) is a certain period of time that needs to elapse before the next potential occupant hops to it. I consider it rude, crass and bad form to leap in like Tigger moments after the previous occupant just unloaded 15 seconds of deodorizer spray. I mean, I don’t want anyone in there after … you know. It’s embarrassing!

Everyone I work with, however, is oblivious to this concept. I seem to be the only one that follows my rules. One time my boss went in moments before I was about to go. Never hold it at work! I couldn’t deal with the reality of exceeding the safety limits of T.P., so I walked to the nearest fast food outlet for a cleaner, fresher experience. Delightful!

The key to fixing this problem is awareness. To help others deal with frustrations caused by a lack of T.P. I have developed an office training seminar including activity kit, talking points, and a special T.P. timer that can be mounted on the bathroom door.