School’s In For Bummer

It used to be that the school year was a happy time. A time when the junior-sized asshole humans were (mostly) out from underfoot. Ahhhh. Those were the days.

You can blame it all on politics and unions and Tea Parties and partisanship and vouchers and hog wallerin’ and mud slingin’ and clean campaigns and dirty campaigns and COLA and inflation and school boards and lots, lots more.

Is an army of darkness one of the seven seals of Armageddon? Or maybe it was a vial? I can never keep those things straight.

Make no mistake. Let me be clear. War has been declared. And war is Hell. Tranquility has been attacked and tranquility will be defended. Even if I have to asplode.

If you want to enlist, make the jump.

We don’t have school age children any more. Well, not in the traditional sense. Our gerbils have matured and de-nested even though their high school educations remain incomplete.

Since we don’t have kids in the school system, you’d think the comings and goings of the school year would be of little interest. You’d be wrong.

It is the American Dream to have your own home, lock yourself inside of it and never open the front door. Ever. Alas, that dream is under threat. The Houseland Security Advisory System has been raised to “SEVERE” due to “Severe risk of cuteness overload solicitation attacks.”

Here’s how it works:

A carpet-bombing scorched-earth policy is employed. This is war! War is no time to be timid. That means target doors have to be hit several times a day. Move like you got a purpose, maggot!

I’ve lost count, but I think our house has been hit by every school, even those out of our district, multiple times. We have obviously been designated a high-value target. The school system intelligence community must be hard hit, because if they think we have disposable income, they are sadly mistaken. We’re in it up to our assets.

Those cute little faces. And their poignant pitches. So moving. So touching. The Program is scientifically designed to move psychological levers designed to make your hand twitch for your wallet before you even know what you are doing. Some of them even flash pictures of puppies.

Here’s the deal. My wife just had surgery and is off-work for six weeks. (Thanks to FMLA the employer can’t legally fire her taking care of her health. Score one for the bottom 47 percent!) She’s not permitted to sleep in a bed. So we obtained a special chair and she sleeps in the living room. Her days are spent watching TV and napping. 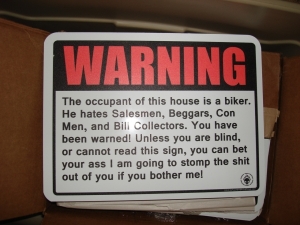 Biker wisdom I can agree with.

Do you have any idea how it feels to be woken up my solicitors – cute or not – when sleep deprived? My wife desperately needs her sleep and the little snot-blowers are treating our house like they’re the three little pigs. We are under siege and I’ve had it.

Without resources of any kind, I’m forced to run a guerrilla counter-insurgency campaign. (The best of both worlds.) I’ve been forced to be creative and think outside of the box. My ideas so far include:

Can you come up with any creative ideas of your own? I’m grading on a curve and will award gold stars to the best participants. And participant ribbons for everyone else. Remember – Creativity is key. There are no points for second place.

Which ideas do you think will work best? Explain your answer.