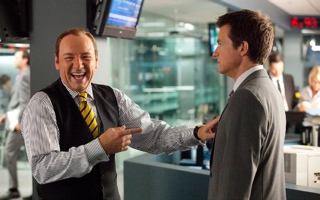 Ever since I reviewed the movie Horrible Bosses this last Monday, I’ve been thinking about bad bosses as portrayed in the movies. You’d think by now I’d be an expert on this but I kind of struggled. I couldn’t think of very many.

Of course, the first one to come to mind was Bill Lumbergh from Office Space. I’ve seen that movie so many damn times. Lumbergh is a classic boss, always moaning about “TPS reports” (whatever the hell they are) and trying to get employees to work on the weekend. He’s not a very good listener, either, and becomes nasty when the consultants he hired turn on him. LOL!

Other than that, the only other bad boss I could think of was the Meryl Streep character in The Devil Wears Prada. Yes, I’ve actually seen that movie, but I barely remember it. Sure, she seemed like a biz-natch to have as a boss, but, deep down inside, didn’t she really care about her worker? After all, she told that other company they’d be idiots not to hire her and then there was that smile at the end of the movie that told us she was nice. You know, deep down inside. Not that it may have matter by then.

That was about it. That was all that came to mind. So I turned to the internet. Ah, I found something called “The Top 10 Worst Movie Boss” on Spike.com. Now we’re talking. Let’s see what they thought of that I didn’t.

Uh huh. Yeah, I thought of that one.

9. John Milton from The Devil’s Advocate

Eh? I don’t think of the Al Pacino character as the “boss.” He’s Satan. This one doesn’t really count, does it? Hooah!

Greed is good. Greed works. And yeah, what kind of asshole wants to buy Blue Star and rip it to shreds just for the hell of it? But I never really thought of the Michael Douglas character as a “boss.” He was a big time trader who was using Bud Fox to gather intel to support his insider trading habit. Somehow I doubt that Bud punched a time clock. I had a supervisor that worshiped this movie and always wore braces. (Not suspenders.) He was, as you’d expect, a total dill hole and eventually got fired. (Sometimes, rarely, it works out like that.)

I know little of this movie, but looking at a photo from the film, I’ve never seen Harrison Ford look more wimpy. Someone get him a whip. Whippy > Wimpy.

Oh yeah! Hella! Now we’re talking!! Ronny Cox plays one bad ass boss. The problem? He’s so bad ass that he actually becomes cool, even though we love to see him get it in the end. The original Robocop was an awesome movie. Chock full of so many feel good moments. Any movie that starts out with eleven X ratings due to violence has gots to be good. It had to be edited down just to get an R rating. Quick. Someone get me the director’s cut!

Erm? What the hell? Spike is on acid here. I don’t get it.

OK, yeah, I’m feeling it. Mmmm, yeah. Bad boss. That glow I’m feeling can only mean one thing. I agree with this pick! It should have been higher, though. Again, I don’t think of the Alec Baldwin character as “The Boss” since he’s from “downtown” but he sure rips the employees a new one. This might be the only pick on the list that captures the essence of employee reality. This worthy mention gets two video clips. First a scene so amazing that Alec Baldwin almost won an Oscar for only seven minutes of screen time. Wow!! Then, a parody of the movie. I give these clips two thumbs way the fuck up. They will make you lose your shit.

Again, I didn’t really see him as a “boss.” Now that you mention it, though, yeah, I can see it. Just not in a traditional sense.

That sound you hear is a choir of angels. Ahhh! Yesss!!!! I hope this is as good for you as it is for me.

What? Again? Seriously, I’m getting tired of this. Vader wasn’t the “boss.” Well, maybe if he had a suggestion box…