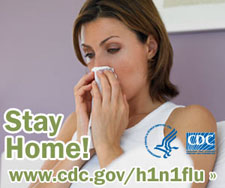 The message is clear. The Centers for Disease Control (CDC) want you to “Stay Home!” when you’re not feeling well. They want you to call in sick.

I don’t want to overstate this, but I am literally a modern day super hero. I am Vector Man. My special powers activate the moment I start feeling ill.

vector: an organism (as an insect) that transmits a pathogen

I know, calling me an insect is quite the over-compliment but I’ll take what I can get.

It’s been at least six years since I last called in sick. And probably a lot longer than that. Unfortunately that’s just about as far as my memory works. I do know this: I’ve been at my current job about 4 months and haven’t called in once. And my previous job was 5-1/2 years and I never called in sick, either. I’ve got quite the streak going.

The problem? Staying home to protect the health of other people costs me money. I haven’t had sick pay since 2001. I also haven’t had health insurance since then, either.

The CDC seems to have the opinion that if people stayed home when they got sick that would be beneficial to society as a whole. Or some such shit like that. Whatever. I don’t live in that world.

Interestingly, if a cell is infected with two different flu viruses (such as H1N1 and H2N2) then the virus genetic material can be rearranged in the cell so that the released viruses include mixes like H1N2 and H2N1 surface molecules.

Saturday, out of the blue, my snotbubbles kicked on. Think of my snotbubbles as similar to Spider Man’s “spidey sense.” So I knew that Vector Man’s super powers were about to power up. That night a cold and/or flu thing came down on me like a ton of bricks. That was one hellacious night and when I woke up my body was feeling like it had tumbled all the way down Mount Everest. Every part of me was sore!

Sunday night was more of the same. When I woke up I was dead man walking. My wife told me to stay home from work. “Ha!” I scoffed in her face. “Vector Man has never failed to perform when needed.” So I dragged my sorry ass in to work and, for once, was successful at keeping my damn trap shut. (Which is, by the way, my #1 goal every time I go to work.) It was a busy weekend and I had a lot of ecommerce orders to ship. I worked half a day, got all my orders out, then asked to go home where I tried and failed to take a nap.

The thing is, and I learned this recently when on jury duty, when I’m not in the office no one does my job! Literally. When I came back to work every single order that had come in for three days was sitting there waiting for me. That really cracks me up! Think the customer is important? Think again!

It works like this: When the boss is there and you are there, the boss will ride your ass hard to make sure those orders go out. It doesn’t matter if they came in at 3pm. They will be going out today. Period. Even if you have to make a special trip to the goddamned post office. But, if the boss is there and you are not, suddenly that shit flies right out the window. Suddenly it’s perfectly fine and dandy for those orders to sit. For days. The message is loud and clear: Fuck the customer if anyone other than Vector Man has to get off their ass and do some actual work.

So yeah, today I will be hauling my ass into work one more time. Even though last night more than lived up to all of my wildest expectations. I’ll be working because no matter how sick I get, Vector Man has a responsibility to his fellow man.

Thank God that Toy Biz v. United States determined that action figures are “toys” and not “dolls.” It wouldn’t be quite as macho to be a doll.