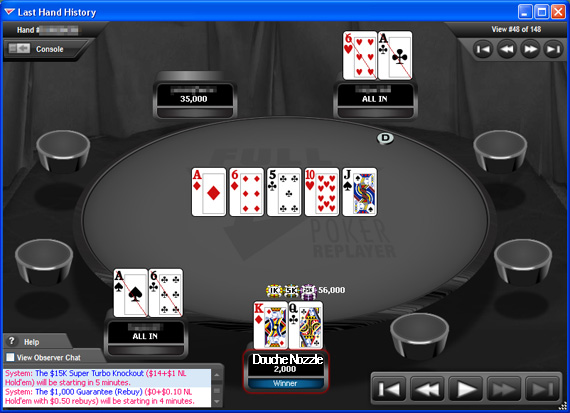 This is the tale of a Texas Holdem “miracle card” on the river.

I had playing conservatively and pushing hard on solid hands. When I was called I generally took the pot with a strong hand, and if I lost a showdown it was generally because I had the best hand at the turn and was beaten by the river. So the players at this table could generally assume I was a pretty tight player who only moved in when I had the goods.

Unfortunately this screen shot doesn’t show the action that led up to this point. I had limped in and called weak bets all the way to the river. Both of my opponents were weakly playing the two-pair they had flopped. I called a weak bet at the turn hoping to see another diamond, thus getting a nut flush draw. That wasn’t mean to be.

Again they bet weak and I called, hoping to see a jack that wasn’t a diamond. (A jack of diamonds would mean there would be a potential flush on the board and I wouldn’t have the stone cold nuts.)

The odds of a non-diamond jack were about 6.5% in that situation. (That is three cards desired divided by the number of cards still unseen. Or 3 / 46 = 6.5%.) Bingo! I rivered that card for the stone cold nuts. An ace-high straight AKA “Broadway.” No other hand could beat me! The worst thing that could happen is someone else was holding KQ, too, and we’d split the pot.

Now these two players woke up and bet hard. Eventually they ended up all in and I had them both covered and every chip in the game was mine. Mwuhahahahaha!

It doesn’t happen often but when it does it is sweeeeeeet! 🙂

Personally I think flopping two pair can be extremely dangerous. You really need to bet it hard to get people away from their drawing hands. What you’re really hoping for is the board to pair aces or sixes and give you the full house. I’ve seen two pair on the flop end up losing way too many times. I almost consider it a jinx. I also consider it extremely dangerous to flop a straight, too. The danger is that the initial excitement of hitting something big can tie you to a losing hand. You have to be extremely careful.

Now please excuse me. I have to go count my chips. 🙂

I don’t wanna be friends

Another low-view video brought to you by the Abyss. Although it might not be low-view for long. These guys are known as “On The Rocks.” They are an acappella group from the University of Oregon.

The fat cats at BP

The smell of freedom 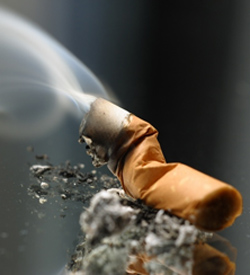 In short, freedom is the ability to exercise free will to make choices and/or engage in behavior without duress or coercion. We recognize, however, that there should be some limits on freedom, namely that our right to free will doesn’t extend as far as hurting someone else or depriving them of their rights.

For example, my right to design, build and own cages doesn’t extend as far as locking another person in a cage without their consent.

I also can’t yell “fire” in a crowded movie theater. My right to free speech is trumped by the possible injury and danger to others. (Thankfully, though, it is still acceptable to yell “movie” in a crowded firehouse.)

Freedom is a great thing and I truly love and embrace the concept. On the other hand, freedom can sometimes be downright fugly.

For one thing, freedom means that if someone doesn’t like you, they can go on the internet (perhaps the orgiastic marketplace of ideas known as Craig’s List) and say some downright nasty things about you. Oh sweet delicious freedom! By the way, if you are ever curious about how truly vile and contemptible and just plain insane humans can get, go to Craig’s List sometime and check out the “Rants and Raves” section. Good clean fun to be sure! It will curl your hair! Speaking of people who should be in cages…

Or how about another quite popular expression of freedom? The smoking of cigarettes. Thank God for freedom, eh? As a non-smoker, what are the myriad of ways that this particular freedom enjoyed so much by others directly impacts me on a daily basis?

I wake up in the morning and find cigarette butts on my driveway. My wife and I don’t smoke. Where could this human flotsam possibly be coming from? I’m assured that my aunt and son (both smokers) aren’t responsible. If that’s true, then the answer must be that passerby using the sidewalk in front of our house like to fling their butts up my driveway. I guess I should be grateful they don’t like to smoke poop.

I drive to work, open the car door, and put my feet on the ground. I’m standing on more cigarette butts.

We go to a county park for a picnic. We set up our Coleman chairs to eat and enjoy some nature and watch wildlife in the river. Near our feet are a plethora of cigarette butts. We walk down to the river’s edge and find a fire pit. It’s full of butts. Incidentally, we paid our day use fee to use this park. We couldn’t use the garbage can, though, because it was overflowing. I took a peek and saw four Hungry Man microwave dinner boxes and a giant box of white rice. Methinks someone had a weird picnic or one of the locals is using the park’s garbage can rather than paying for their own garbage. That’s the way people roll around here.)

Anyway, when it comes to cigarette butts, I think might be starting to get the picture. They are ubiquitous and found everywhere I go starting with my very own driveway. There is nothing quite like stepping out of your own front door and being impacted negatively by your fellow man within five seconds. Just by setting foot outside of my door – and while still on my own property – my freedom and pursuit of happiness is seriously impacted. I’m curious – which one of the founding fathers is going to materialize and stick up for me?

I can’t walk into and out of my own home, a grocery store, restaurant, place of business, or even drive my car down the main street in my home town without being assaulted by the smell of everyone else enjoying their own freedom. Cigarette smoke is everywhere. And even in areas where smoking is not allowed these days, like restaurants, elevators, and the workplace, I still get physically assaulted by the odor of smoking that clings to certain people. It’s like having an ashtray rubbed in your face. (I’ve read some new studies that say second-hand stench may be dangerous just like second-hand smoking. The way some jackasses smell may go beyond mere offense. It might just be physically injurious to those around them.) Freedom!

I want to close out this post by telling two quick stories both relating to my freedom.

What is it about smoking that demands it is a “right” that has to travel most everywhere smokers go? I have the right to have sex in my bedroom, but that right doesn’t automatically extend to everywhere I go. I can’t legally get jiggy with it on the sidewalk or city-owned parking lots. Why does smoking have more rights than sex? Again, I can pee all I want in my own bathroom. But I can’t legally mark my territory everywhere I go, like on the sidewalk, in an alley, at the park, or on a beach. Why does a bodily function have less rights than smoking? What makes smoking the most special activity of all time? And even if kept to personal property, as I’ve clearly shown, it can still impact the mother fucking shit out of other people. Will this ever end?

I’m on the wrong planet. There was some major fuck up in Galactic Baby Assignment. I should have been sent to a planet where idiots don’t blow up their own lungs and shrapnel everyone around them with collateral black tar damage.

Where do I go to request a planetary transfer? I wish to immigrate.