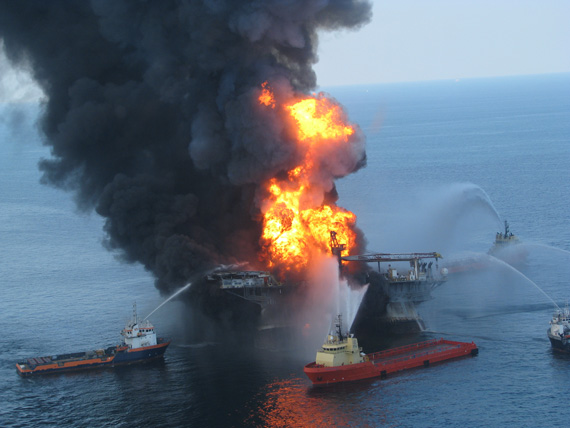 When Obama critics ask questions like, “Is the gulf oil spill Obama’s Katrina?” what are they really talking about? I mean, besides the standard “my guy good, your guy bad” stuff.

First of all, let’s get one thing straight. Hurricane Katrina was a natural phenomenon albeit with some difficulties that were exacerbated by man-made contributing factors, like designing and building a major city that is protected by levees and flood walls. “The Gulf oil spill” aka “the Deepwater Horizon oil spill” is solely a man-made phenomenon.

So Hurricane Katrina was a natural phenomenon and the Deepwater Horizon oil spill was a man-made one.

Here in Abyssia (my home nation) we have a simple law. It goes like this:

Private companies are not permitted to engage in any activity where the potential damages that might be caused exceeds the sum total of the company’s resources.

In other words, when the damage that might be done by a private enterprise is so extreme that it can’t be permitted to exist, then non-government operations must not be allowed to operate in that field. That is because when things go wrong, it is the government that will have to take care of the fix.

Why allow a private company to operate and make a profit when it doesn’t have the ability to be responsible for the damages it might cause? That just doesn’t make sense.

“Listen. We’re going to run a racket that will make us filthy rich. The downside is that if things go badly, we’ll be wiped out and we’ll take the whole planet, a country, or an entire ocean with us. We’ve thought it over. Hard. And golly gee. It turned out that we’re willing to take that risk. Even if it means we only get rich for a little while.”

What will the ultimate cost of the BP oil spill disaster be? And will it be BP or our government (aka you and me) that picks up the tab? What if the cost exceeds the total value of the BP Corporation? (The corporation had assets of about $236 billion in 2009.) Then what happens? In a case like that, even if BP wanted to do what was right (highly unlikely), it would lack the capacity to execute. It would be like pooping in one hand and wishing in the other – all you’d end up with would be a handful of poop.

The United States can sure cut off its nose to spite its face. You have something called the Oil Pollution Act that caps “environmental damages” at $75 million. How fucking ridiculous is that? Why not trying capping damages at, say, oh, I don’t know — the actual freakin’ amount?!?!?!?

“I’m so sorry I smashed your car, old chap. The government, though, acts as my body guard and caps my responsibility for all damages I cause at $75. Here’s a personal check. Don’t worry, it’s good. Sorry about the Rolls Royce and all that. Cheerio!”

Let’s compare the $75 million limit on environmental damages to the Exxon Valdez oil spill. In that case the cleanup effort cost Exxon $2.5 billion and an additional $1.1 billion in various settlements. That’s out of pocket damages of about $3.6 billion to Exxon. It makes the $75 million cap seem pretty tiny, eh?

How much more expensive will it be in the gulf oil spill? Yeah, $75 million is going to go a long, long way, I’m sure.

What are “environmental damages” anyway, and how are they calculated?

Cost estimates of damage to the environment may be underestimated significantly by those charged with putting a price tag on ecological disasters. According to Daniel W. Bromley, a resource economist and former director of the University of Wisconsin-Madison Institute for Environment Studies, the consequences from mishaps such as groundwater pollution and oil and chemical spills may be off by a factor of three to five, meaning estimates of perceived damage could be millions or tens of millions of dollars too low in a given situation. “Damages can be estimated in different ways. It all depends on what questions are asked” and what criteria are applied by the courts and policymakers. (Source.)

Oh? Policymakers get to determine the “criteria?” Cue the oil industry lobbyists and the “we’re too big to fail” whining and, of course, the “we’re so important to national security” blather. You know, you might have a point there but your touching concern for national security just doesn’t ring true when it is your wallet that hangs in the balance.

It is being reported that Obama now “strongly supports” raising the cap on environmental damages. Wow. How nice. Of course, that’s a move that can only come from Congress. Oops.

Why in the name of all that is holy would you deliberately go out of your way to set up a system that says a commercial enterprise can engage in an activity and cause damages with not end in sight yet at the same time cap the amount of damages for which they can be held accountable? Oh, that’s right. We don’t want government to be a “daddy” and regulate or otherwise hinder a “free market.” We just want it there to pick up the tab when the shit goes sideways. We wouldn’t want a company that large to fail, would we?

Some of Obama’s most vociferous critics are those that call him a “socialist” ad infinitum. So, if they don’t like “socalism” what do they like? A free market system. They typically oppose government regulations and interference in the world of business. They frequently complain about the “nanny state” and regulations and say that government should not be a “daddy” in our lives. The free market, they claim, will take care of itself. The free market is very self-correcting, they say. Sure, there may the occasional “problem” here and there but in the long term the free market will work those problems out on its own.

Too bad those free market corrections can be exponentially destructive. Sure the system usually works itself out but at what cost? Human lives, pain and suffering, lost retirements, lost homes, lost careers, etc. Don’t worry, your life was just destroyed but a little “correction.” I’m sure that makes you feel better.

So, how then, I ask, how will the “free market” rise to the unique challenge presented by the gulf oil spill? Where is the “profit” in being one hundred percent responsible and accountable for your mistakes? What if the cost of the fix simply cannot be covered by those responsible?

If a private enterprise can’t or won’t fix the damage it has caused, and if the consequences are too serious to the entire freakin’ planet, then it is that evil boogieman called “government” that has to ride in like John Wayne and save the day. Yee haw.

Suddenly it’s ok to say, “Fuck the free market. Looks like we need daddy government after all. We need daddy to clean up the mess we made. Oh, boo boo.” Sounds remarkably like a gerbil in my humble opinion. “I want all the good times but I don’t want to be responsible. Whaaaaaa!”

I guess we can always choose to do nothing, just sit back and allow corporations to continue to wreck our planet until there is nothing left to wreck. Some day the profits will run out, but what a wild ride it will be for the few who benefited along the way. I’m sure we can all adapt to breathing fire and replacing oxygen with oil. Perhaps some specialized genetically-installed oil-breathing gills from the BP research and development team will solve that problem? Hell, it might even be an improvement on the reality we currently have. “I want to breath oil and fire, I say!”

So, what do we know about the accident that led to the sinking of the Deepwater Horizon and the worst man-made ecological disaster of all time?

Simple statistics tell us the odds of a Deepwater Horizon are about 100 percent. That’s because the event happened. So in this instance the chances are a certainty.

What we don’t know is how likely was this disaster? Was this a one-in-a-million freak confluence of events where everything that could go wrong did? Or was this accident not really an “accident” at all? Did BP go above and beyond to take all reasonable precautions to prevent a disaster like this? Were all the laws obey? Were proper safeguards devised and employed?

Somehow, based on what actually happened, I sincerely doubt it.

There are really two issues here. The first is the weak and watered-down regulations regarding off-shore oil drilling that government actually has on the books. As in the case of most laws, I’d wager these were probably written with the direct buy-in and/or control of industry and that, additionally, they are likely to be woefully unenforced, if at all. The second issue is the safety controls self-regulated by industry – what precautions they feel are prudent. No big surprise if these fall short, right?

The scuba industry regulated itself. It has worked very well for a long time. When it doesn’t work well, a single dumb ass human usually dies. When an oil rig suffers a catastrophic failure, the consequences are a wee bit higher, like, perhaps, the lose of an entire ocean. Maybe we shouldn’t trust self-regulation quite so much.

So the question remains: Were all the reasonable precautions taken in the case of the Deepwater Horizon? Government officials are now talking tough in the media that criminal charges will be brought if it is determined that laws were broken. Yeah, right. Perhaps they’ll find a scapegoat or two but the people really responsible will get a slap on the wrist (if anything at all) and will be allowed to go on raping the planet and their fellow man in the name of being wealthy beyond avarice.

Can the BP Deepwater oil spill be Obama’s Katrina? Some media reports run counter to this criticism. The Obama administration may have made some missteps but a comparison attempting to cast Obama’s response in the same vein as Bush to Katrina is not useful and may not even be accurate.

Secondly, one was a natural disaster and one was man-made. You can’t have your cake and eat it too, Obama critics. You can’t say, “Keep daddy government out of free market and things like oil drilling. We need less regulations. Let the free market work. Oops. Oil rig went boom boom. We can’t fix. Please, government, come save our bacon.”

If enterprises like banks and oil companies can’t clean up their own messes and are “too big to fail” and are utterly destroying one of our planet’s oceans, then I submit they shouldn’t be allowed to engage in an enterprise where they can’t control and fix the outcomes they have produced.